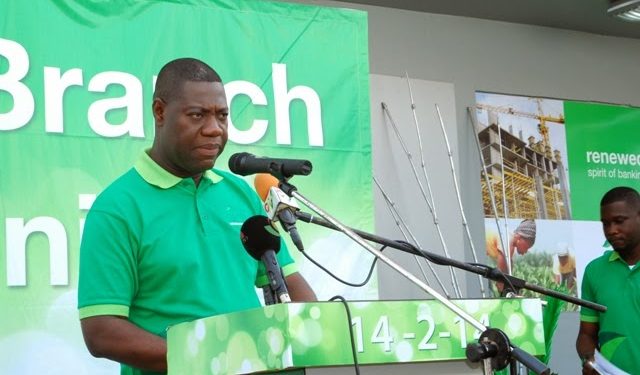 The Bank of Ghana (BoG) is likely to receive about 220 million cedis for its stake in Agricultural Development Bank (ADB) if ADB’s Initial Public Offer (IPO) on the Ghana Stock Exchange (GSE) is successful.

[contextly_sidebar id=”1R28zp1wEItAkI3u0ddNvw3g9gTWagy8″]ADB which is hoping to raise a total of about 420 million cedis from the IPO is expected to give up about 220 million cedis to the BoG for its 48 percent stake in the bank which it will offload during the IPO.

The bank will issue about 1.4 million shares comprising of the BoG’s shares and some new shares from the bank proper.

The new shares which will be floated by ADB bank is expected to yield some 200 million cedis and will be used for ADB’s expansion program and boost its capital.

SEC’s Director General Dr Adu Anane Antwi told Citi Business News ‘they are rising about 420million out of the issue of about 1.4million shares but some of the shares are for owners who are presently holding those shares, specifically Bank of Ghana which is giving it shares out and the Bank is also floating new shares for its expansion program that is about 200million to the bank itself’.

SEC last week approved ADB’s IPO which is likely to takeoff by the end of next month.

According to Dr Adu Anane Antwi ‘If ADB’s offer document has been approved by the commission then they can go ahead and open the offer and get people to subscribe to the offer that they are offering and once they complete the share offering and is successful then they will go ahead and list the shares together with the previously issued shares on the stock exchange’. He said.