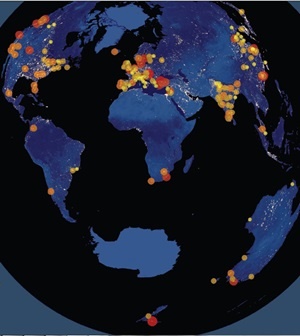 Overall, the Global Residential Cities Index increased by 4.4% in 2015. More than 121 of the 165 cities tracked by the index saw house prices either rise or remain flat in 2015.

The Chinese city of Shenzhen tops the index with price growth of 47.5% recorded in 2015. More than 22 percentage points separates Shenzhen from the index’s second ranking city, Auckland, which saw prices grow on average by 25.4%. Istanbul (25%), Sydney (19.9) and Shanghai (18.2%) complete the top 5 cities.

Twenty US cities made the list. Portland (11.4%) did the best followed by San Francisco (10.4%). Washington DC (1.7%) saw the weakest growth among the US cities listed. Vancouver is, however, the best performing city in North America with average price growth of 11.9% on an annual basis.

According to Kate Everett-Allen, international residential analyst at Knight Frank, urban and rural housing markets are increasingly polarised when it comes to price performance. She said, according to the World Bank, 54% of the world’s population currently lives in cities, and by 2045 the urban population will rise by another 2 billion to 6 billion, suggesting the pressure on urban prices looks set to intensify.

How a Ghanaian turned the moringa plant into a business