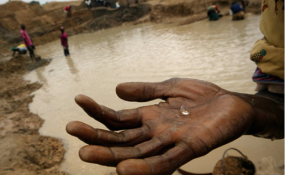 Government will soon establish an inquiry into the disappearance of $15 billion worth of Marange diamonds, a minister has said.

Mines minister, Walter Chidhakwa, told reporters in the eastern border city last week that his office had been instructed to investigate the matter after President Mugabe expressed ‘deep concern’ over the missing $15 billion.

Mugabe recently acknowledged that $15 billion worth of gems disappeared from Marange fields with the treasury receiving only a small chunk, raising the ire of citizens and opposition parties who have demanded the president’s resignation over the matter.

According to experts, $15 billion is enough to turn around Zimbabwe’s economy.

“Yes, we were given the instructions. We are appointing some companies to conduct a forensic audit of all the companies in order to establish how the companies mined the diamonds in the last five to six years depending on when they started operations,” said Chidhakwa.

He said the audit will look at how companies marketed their gems and establish how exactly the funds were misappropriated.

“It’s something that we are working on and soon the report will be out,” said Chidhakwa.

Government recently cancelled permits of firms that were mining diamonds in Marange and formed the Zimbabwe Consolidated Diamond Company (ZCDC).

The affected mines are Chinese owned Anjin Investment, Jinan, Mbada Diamonds, Diamond Mining Company (DMC) and Kusena. Russian owned DTZ-OZGEO which had its concession at Charleswood Chimanimani was also not spared in the consolidation exercise.

However, other companies such as Mbada and Anjin have dragged government to court over the seizure of their concessions.

However, High Court granted a reprieve to the companies to at least access and safeguard their properties at their mining concessions but not to mine the gems.

Traders push for cancellation of 17.5% VAT