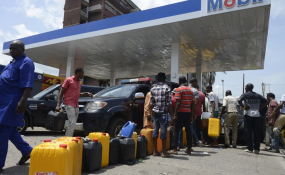 Nigeria is set to ramp up the amount of crude oil it swaps for vital petrol imports by more than a third as it grapples with the worst economic crisis in years and upheaval in its graft-ridden energy sector.

A more than 60 per cent drop in global oil prices since 2014 has hammered Nigeria’s economy and triggered a currency crisis, leaving it short of funds to pay for imports of oil products.

While the country is Africa’s biggest oil producer, it is almost entirely reliant on imports for oil products, especially gasoline, after successive governments allowed its refineries to fall into disrepair.

The deals are crucial to staving off fuel shortages that have already created queues across the country.

“Nobody wants to see people spend two hours on fuel queues,” minister of State for Petroleum Resources, Ibe Kachikwu said on Twitter this week. “We are working on long-term solutions,” he added.

The deals are not yet watertight, however, but while the broad terms were agreed, multiple sources told Reuters that at least some of the one-year contracts have not been signed – leaving them at risk of change.
NNPC is in the middle of a restructuring that will split it into 30 different companies, leading to an extensive management shake-up.

Sources said constant changes in management and staffing at NNPC meant they were at times dealing with one person one day, and a different the next, making it difficult to conclude the contracts and raising concerns over NNPC changing the terms.

Under preliminary agreements, each refiner will ship roughly 90,000 tonnes of gasoline in exchange for each 950,000-barrel cargo of oil, regardless of the grade, along with other products, sources said.

That amounts to NNPC swapping 330,000 barrels per day (bpd) of crude in total, well above the 210,000 bpd agreed initially last year with four refineries. The new agreements were intended to start with the April crude loading programmes.