Price of yam increases in third week of March 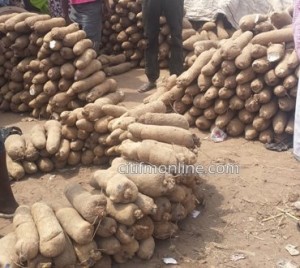 Ghanaians should expect to pay more for yam (pona) since the price of the commodity has appreciated in its price.

The price of yam has increased by 8 percent and is now being sold in the market at an average price of GHc5.20 per “medium size tuber.”

[contextly_sidebar id=”MNBuKMuPOmKJxiOaErT57o8z9d2ZvqR5″]Maize also recorded an increase of 4 percent to close the third week of March, selling at GHc 5.00 per medium size tin.

Wheat gained by a percentage point to close the week at GHc 12.50 per “olonka.”

Millet followed with a percentage point loss to close the week at GHS 5.20 per “olonka”.

A “medium size tomato tin” full of fresh tomatoes lost 20 percent in Accra to close the week at GHc 8.00.

Content Manager at Esoko Ghana, Francis Danso Adjei explained that the price of yam increased because “there is no “pona” in the system. So it is the few ones the farmers bring to the market that is being sold in the market.”

“We are still waiting for the bumper harvest. Tomato is also moving up, it means that the lot that were in the system from Burkina Faso is reducing, so we are going to see more price increase in the coming weeks. With rice, the prices have gone down because there is a lot in the system from the north,” he added.