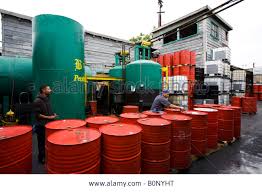 The National Company for the Marketing and Distribution of Petroleum Products (Naftal) on Monday unveiled the main lines of its development plan which extends until 2030 to strengthen its position in the domestic market.

Outlined during a meeting attended by its CEO Hocine Rizou, and CEO of its parent company Sonatrach, Amine Mazouzi, Naftal mainly eyes national autonomy in fuel storage for 30 days, i.e. a volume of 2.1 million m3 by 2020.

Nine storage center projects are currently underway and are expected, once delivered, to increase by 415,000 m3 the national storage capacity, according to figures presented by the company’s director of planning, strategy and economics Mohamed Benchoubane.

Similarly, a dozen similar projects are expected to be launched in 2017 with an additional 1.5 million cubic meters, and storage autonomy of 22 days, said Benchoubane.

In order to secure fuel supply throughout the national territory, improve the distribution system, improve hygiene, safety and environmental performance (HSE) and reduce the use of road transport, projects of fuel transport by pipeline were launched by Naftal.

The projects concern the duplication of Skikda-Khroub 105km pipeline and the Khroub-El Eulma 103 km pipeline.

Also, 6 pipeline projects, part of the new refining scheme agreed by Sonatrach, will be received by 2020 at the latest.

For improving fuel distribution conditions in large cities, 136 huge gas stations will be built in the suburbs of big localities, expressways and ring roads by 2030.