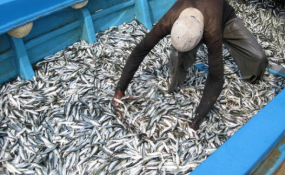 The operation, which culminated in the arrest of the respective ship-owners, was triggered by a multisectorial team integrated by Luanda Port authority and by the inspection services of the Ministry of Fisheries.

The spokesman of the National Police, Sub-commissioner Orlando Paulo Bernardo, told reporters Monday that “the unrelenting activity of these ship-owners endangers the fundamental objectives of the country’s economy.”

ADVERTISEMENT
The police officer stressed that was possible to arrest the offenders through the information alert system of interministerial commission created for fighting such situations and others offenses on the sea.

He noted that the vessels were supposed to fish within 1,000 meters of the oil rigs, but they do so within the forbidden security perimeter and ignite fire.

The detained ship-owners will be presented to the court for trial. The last ship-owner detained for the same practices was sentenced by the court to pay a fine of over 100 million kwanzas.