Egyptian Pound Trades Around 18 Per Dollar in Banks 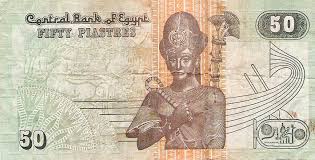 Egyptian pound remained steady at around 18 per dollar in most banks on Sunday.

The dollar was sold at the Al Ahli Bank, Banque du Caire and the Central Bank of Egypt at EGP 18.11, while it was bought at EGP 17.86 in all three banks.

It was sold at EGP 18.40 and EGP 18.20 at Egyptian Gulf Bank and Housing & Development Bank, respectively.

Abu Dhabi Islamic Bank had the dollar sold at EGP 18.25 and bought at EGP 18.10, while the rates at the Arab African International Bank stood at EGP 18.18 for selling and EGP 17.93 for buying.

The pound had strengthened later last week for around 18 per dollar after it had approached EGP 20 last month.

Egypt’s President Abdel Fatah al-Sisi said earlier in December that the pound was not valued fairly against the dollar, saying that it would strengthen over coming months.

“But for the equilibrium we are talking about to be reached we need some months,” Sisi said.

Egypt floated the pound on Nov. 3 and raised interest rates by 300 basis points in a dramatic move welcomed by businesses as the key to unlocking investment.

Egypt’s dollar peg had drained the central bank’s foreign reserves, which have been hit by reduced foreign investment following political turmoil in the past few years, forcing the bank to impose capital controls and ration dollars.