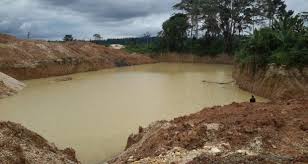 Citi Business News has gathered that the Kyebi water treatment plant which was shut down last year due to the effect of activities of galamsey operators, has started operating intermittently.

The plant was shut down in August last year because activities of illegal gold miners had left the natural water bodies not treatable for onward distribution.

“The plant has indeed been reopened but it was closed down as a result of the high turbidity of the raw water,” the Head of Communications at the Ghana Water Company, Stanley Martey told Citi Business News.

The Ghana Water Company Limited (GWCL), two months ago announced that it was still unable to open the Kyebi Water Treatment Plant months after its closure due to high turbidity of the water.

In an interview with Citi Business News however, the Head of Communications at the Ghana Water Company, Stanley Martey said the plant is still not able to fully produce adequate quantities due to the development.

“Now anytime the turbidity or the quality of the raw water improves, to the extent that the plant is able to treat the water, we do operate the plant. But when the turbidity is high and the water is rendered untreatable then we shut it down so it’s been off and on.” he said.

He emphasized that, “The galamsey activities are still ongoing but we are doing our best to see the possibility of drilling more boreholes because the Birim river to which we have strapped for production is now becoming almost untreatable and dead.”

Although he bemoaned the difficulties the effect is having on the treatment plant he assured that his outfit is working on ways to ensure constant supply of good treated water to the various environs.

“So it is a difficult situation but we are doing all we can so that we can still supply the community’s needs.”

Earlier the Ministry of Water Resources, Works and Housing warned of a possible impending closure of three major water treatment dams due to the activities of illegal mining.