Rwanda: Year Review – How the Agriculture Sector Fared in 2016 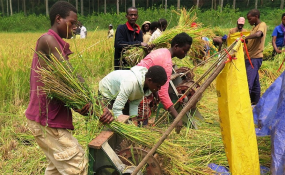 A lot went on in the agriculture and livestock sector in 2016 – the sector where about 70 percent of Rwandans derive their livelihood.

On average, agriculture contributes about 33 percent to Rwanda’s Gross Domestic Product (GDP) between 2007 and 2014, as per the National Institute of Statistics of Rwanda (NISR).

From the most prolonged drought in the country to new fertiliser and seed distribution model, to (Private Sector Federation) donating Rwf1.1 billion in support for Girinka – One Cow per Poor Family – Programme; in this article, we present 10 major events that marked the agriculture sector in 2016.

Almost the entire country felt the effects of the longest drought in the last 60 years.

But, the Eastern Province was hit the most. For instance, more than 47,300 households in Eastern Province bore the blunt of such drought which also caused crops to wither, hence resulting in crop failure and threatening food security.

The situation necessitated Government intervention in terms of food distribution to the affected families that had no harvest for two seasons since September 2015.

Trucks were used to fetch water for cattle.

But some water sources dried up, and some cows died owing to prolonged drought.

An assessment conducted by the Ministry of Agriculture and Animal Resources (MINAGRI) in Eastern Province showed that between September 2015 and June 2016, drought affected crops on at least 16,119 hectares of land in Kayonza District, 6,619 hectares in Nyagatare District and 750 hectares in Kirehe District.

To mitigate the drought impact and ensure preparedness and resilience against climate change effects, Dr. Théogène Rutagwenda, the director-general for animal resources at the Ministry of Agriculture, cited several Government initiatives.

These include construction of valley dams, whereby six have already been built in Nyagatare District, six in Kayonza District and one in Gatsibo District.

Other interventions are the cultivation of drought resistant forage for livestock’s consumption, and irrigation.

An estimated 19,000 hectares of land are expected to be irrigated from this financial year through 2018, which include 15,000 hectares for marshland and 4,000 for hillside, according to Rwanda Agriculture Board (RAB).

About 45,000 hectares are already under irrigation in the country.

On November 4, 2016, the International Fund for Agricultural Development (IFAD) and the Government of Rwanda signed an agreement for Rwanda Dairy Development project, a new initiative that is expected to improve the livelihoods of over 100,000 smallholder farmers and generate opportunities for other actors in the country’s dairy sector.

The project will cover 12 districts and involve an investment of $65.1 million, which includes a $43.6 million IFAD loan, a $1.1 million IFAD grant, a $4 million grant from Heifer International and contributions from the Government of Rwanda, the private sector and project beneficiaries.

In a statement IFAD said the new project will improve milk quantity and quality, farmers’ processing capacity through promotion of climate smart technologies and practices, and support the development of dairy cooperatives to benefit from market driven production, processing and trading of improved dairy products. It will also help strengthen an inclusive policy and institutional framework for the sector.

On December 6, 2016, the Private Sector Federation (PSF) donated Rwf1.1 billion as contribution to the promotion of Girinka Programme.

PSF Chairperson, Benjamin Gasamagera said that the move was in line with the organisation’s target to offer 4,000 modern cows to vulnerable families under Girinka Programme, so as to contribute to their graduation from poverty.

About 260,000 vulnerable households have received cows against the 350,000 targeted households by 2017, according to October 2016 figures from Rwanda Agriculture Board (RAB).

The Government leased management and operationalisation of Urban Fisheries Products Promotion Centre, a move officials say will ensure proper handling of fish produce, market access and, most importantly, address the issue of lack of enough nutritious fish feeds, which has been a major concern for the sector.

The development followed Cabinet meeting that on September 13, 2016, approved the Lease for the Management and operationalisation of that Centre located in the Kigali Special Economic Zone by AQUAHORT Export Ltd/AEL.

Under the 10-year lease deal, AQUAHORT Export Ltd/AEL, fish farmers are expected to benefit from on-credit feed from the factory set up by the company through an agreement requiring farmers to supply it with fish. The fish feed factory worth Rwf300 million is expected to have capacity to produce five tonnes of feeds per day.

National fish production is estimated at 28,450 tonnes currently, representing 25 percent of the target of (112,000 tonnes) by 2017, as shown by figures from MINAGRI.

Rwanda imports 15,000 tonnes of fish per year, according figures from RAB.

The move, according to farmers and other agricultural players, will help curtail malpractices in the agricultural input distribution chain.

Indeed, farmers and agriculture players contended that some fertilisers were previously illegitimately exported to neighbouring countries and nepotism applied in the distribution of seeds due to lack of proper distribution channel.

Under the new arrangement, farmers are buying government-subsidised fertilisers from over 900 agro-dealers across the country, but after presenting land titles to verify whether the amount of fertilisers they request matches the size of their land, according to RAB.

On fertiliser application level, last financial year, around 32,000 tonnes of mineral fertilisers were used, according to RAB.

The Government targets to have about 50,000 tonnes of mineral fertilisers applied in the 2017 agriculture season A and B, with estimated Rwf9 billion in subsidies for both seeds and crops in the same period.

Members of the Parliamentarian committee on agriculture, livestock and environment examined a new draft law establishing RAB and determining its mission, organisation and functioning.

However, there was lack of harmony in the operations of RAB personnel as they were still working as though they were from their respective institutions prior to their union as RAB.

Under the new law, lawmakers called for proper use of arable land available in the country to get optimal produce.

They called for empowering of farmers in terms of good farming practices and providing them with quality improved seeds.

Another area that they said has to be considered is to ensure effective implementation of research and extension services such that new agricultural inputs reach farmers and benefit them accordingly.

On October 20, 2016, while King Mohammed VI of Morocco visited Kigali, Rwanda and the Kingdom of Morocco signed bilateral agreements in the advancement of agriculture sector which will see sealed cooperation of the two countries’ agriculture ministries in areas including exchange of expertise in water management, agriculture finance and crop insurance, horticulture, animal health and production.

Other areas included soil mapping and testing, irrigation as well as fertiliser manufacturing and blending.

Under the fertiliser blending, MINAGRI signed an agreement with Office Chérifien des Phosphates (OCP) – a Moroccan state-owned phosphate mining company which is the world’s leading producer of phosphate rock and phosphoric acid as well as one of the leading global fertiliser players – to set up a fertiliser blending factory in Rwanda.

Speaking after the signing of the agreement, the Minister for Agriculture and Animal Resources, Dr. Gerardine Mukeshimana said that establishing a fertiliser blending plant in the country will give farmers access to better agricultural input products that are tailor-made for the local soil, hence improving agricultural productivity.

Members of the Senatorial Standing Committee on Economic Development and Finance engaged in an outreach tour that was intended to monitor and assess the performance of the agriculture sector in the country.

The assessment based on the benchmarks outlined in government’s current seven year programme.

The programme, running from 2010 through 2017, aims at ravitalising the country’s development in various aspects, including governance, justice, economy and social well-being.

While presenting the sector status report to the legislators, Octave Semwaga, the Director of Strategic Planning and Programme Coordinator at the ministry, said about 41 percent of farmers now use improved seeds, against the set target of 100 per cent by 2017.

The senators said that there is need to revitalise research on crop diseases such as in cassava, banana, fruit and beans and ensure that there is enough and affordable improved seeds so as to meet agricultural targets.

On October 11, 2016, the Government launched the first phase of Agriculture Land Information System (ALIS) to help fast-track the Government’s goal of transforming agriculture from subsistence to an economic engine.

This includes helping investors from anywhere in the world have easy access to land information, including size, general soil type, suitability to a given crop, current land use, electricity, proximity to roads and water sources, and agro-climatic conditions.

Officials said one of the main challenges to increased private investments in Rwanda is the lack of quick and accessible information on land available for commercial use by potential interested private investors.

The agriculture policy that was developed in 2004 was revised last year 2016 with intention to optimise produce from agriculture and livestock sector, at the same time ensuring proper utilisation of natural resources and sustainability for future generations, according to officials from MINAGRI.

The main aspects that the review focuses on include proper management of water resources both for crop irrigation and domestic and industrial use, helping farmers get affordable seeds and access to markets for good prices and income. Other priority areas are the development of crop and livestock varieties resistant to climate change related issues, and agriculture and livestock insurance as well as the use of ICT in agriculture.

The programme also puts emphasis on value-addition to agricultural produce through setting up agro-processing units, and enabling proper post-harvest handling to avoid losses.

The Strategic Plan for the Transformation of Agriculture in Rwanda Phase III (PSTA III), which aims to intensify and commercialise agriculture, targets to attain an annual agricultural growth of 8.5 percent, annual export growth of 28 percent and 40 percent of land under modern agriculture by 2017/2018.