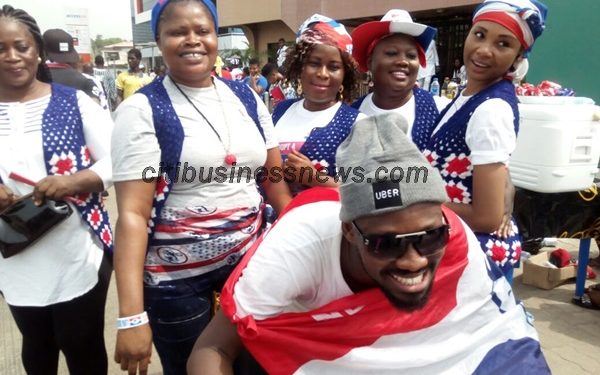 Some patrons of the paraphernalia displaying their items at the inauguration

It appears traders of NPP’s paraphernalia were one of the few business operators who cashed in significantly during the swearing in of Nana Akufo Addo.

The business which saw a little decline after the elections picked up over the weekend when thousands of supporters thronged the Black Star Square to witness the inaugural ceremony.

Checks by Citi Business News indicate that increased sales for the NPP paraphernalia were recorded moments after Nana Addo was declared President elect.

According to them, items such as scarfs, wrist and arm bands, caps, t-shirts among others were in high demand with prices of such been increased from between GH¢5 to GH¢20 to GH¢10 and GH¢100.

Though the business subsided a little, the inauguration of Nana Addo rekindled purchases of such paraphernalia.

“Business is so good that I even had to go to Kumasi for more goods to come and sell. I can’t even keep up with how much I’m making. This ribbon for instance was priced at GHc5.00 but it is now GHc20.00. The hat was also priced at GHc10.00 but now that Nana has come it is priced at GHc20.00 the horn was priced at GHc 5.00 but now it is GHC15.00. I have made a lot of profit and can venture into any other businesses,” one trader Aunty Lizzy stated.

But not all traders had increased their prices following the boom; Kojo is one of such vendors.

Meanwhile the Kalypo craze which emerged during the campaign season has also caught on with the inauguration of President Akufo-Addo.

A vendor explained to Citi Business News “We used to sell it at 1 cedi 50 pesewas but today it’s going for 1 cedi just because our government is in power.”

Meanwhile Ghanaians seem not to have forgotten about their expectation of the Nana Addo led government.