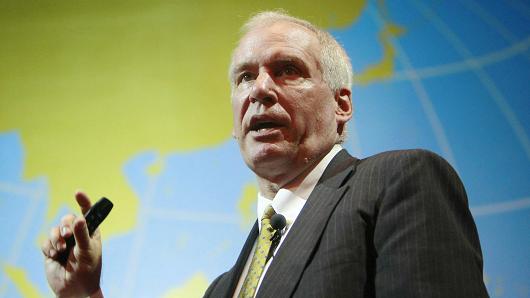 Boston Fed President Eric Rosengren on Monday called for the U.S. central bank to step up its pace of interest-rate increases from the once-a-year pattern it has pursued since 2015, warning of inflation risks if it does not.

“I expect that appropriate monetary policy will need to normalize more quickly than over the past year,” Rosengren said in remarks prepared for delivery to the Connecticut Business and Industry Association.

At 4.7 percent, unemployment is now at a level that is sustainable over the long-run, he said, and inflation is on track to reach the Fed’s 2-percent target by the end of this year.
“Without further gradual increases in interest rates, one might be concerned that the unemployment rate could drift below its long-run sustainable level — and as a result, inflation could eventually exceed the Fed’s 2 percent target,” he said. “The stance of monetary policy will need to adjust — to prevent the economy from dramatically overshooting on both elements of the dual mandate, which would place the economic recovery at risk.”

Rosengren, who does not vote on the Fed’s policy-setting committee this year, was long considered a dove, supporting low rates to boost employment even at the risk of some inflation. Over the past year he has adjusted his stance to be more hawkish, calling for rate hikes even as the Fed kept policy on hold for most of the year. On Monday, he explained that shift as a reaction to the strengthening economic data.

The Fed raised interest rates last month by a quarter of a point and policymakers signaled they expect to raise rates three more times in 2017.

That pace, which is faster than markets currently expect, “seems reasonable if we continue to see real GDP growing faster than the so-called ‘potential’ rate,” Rosengren said.

While the growth outlook does not require the Fed to raise rates at every Fed policy-setting meeting, as it did during the last tightening cycle from 2004 to 2006, the Fed does need to reduce monetary policy accommodation, he said.

“My own forecast is that we will achieve both elements of the dual mandate by the end of 2017 — and as a result, I believe that a still gradual but somewhat more regular increase in the federal funds rate will be warranted.”