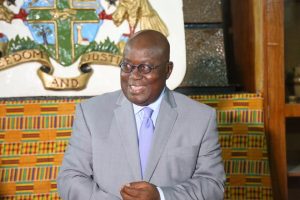 President Nana Akufo-Addo will today, Tuesday, February 21, 2017, deliver his maiden state of the nation address before Parliament in accordance with Article 67 of the Constitution.

His address will present an outlook of the state in various sectors of the economy, as inherited from the erstwhile National Democratic Congress (NDC) government led by John Mahama.

President Akufo-Addo will be expected to outline his vision for the development of the country for the next fiscal year.

His address is likely to focus more on the country’s economic sector which the government, while in opposition, was very critical about, and condemned the then government for undertaking unproductive ventures that have plundered the country into a crisis situation.

The address will be his second major national address after his inauguration day speech sought to reignite patriotism and appeal to Ghanaians to work together for the common good of the country.

The Minister for Information, Mustapha Hamid, has said that the President has appropriately prepared himself for the major event before Parliament.

Speaking on Eyewitness News on Monday [February 20, 2017], he said the President’s address will announce his plans to make the country better than it was handed over to him by former President John Mahama.

“He [Akufo-Addo] looks up to it [the address] with great expectation because it is his first state of the nation, and therefore it is historical for him. He wants to make that debut a very memorable debut, and therefore he is preparing fervently to give an address that is catchy and will bring all Ghanaians along to buy into his vision of how our country should progress,” he said.