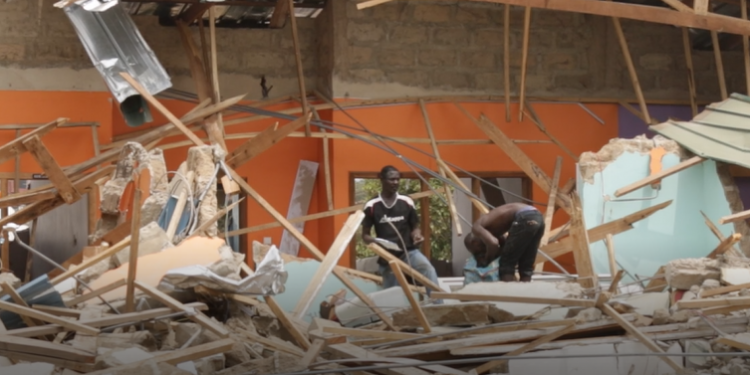 One of the demolished structures.

30
SHARES
1.5k
VIEWS
Share on FacebookShare on TwitterShare on Whatsapp

Owners of buildings demolished at Trade Fair in Accra have condemned authorities for carrying out the exercise without giving them ample notice.

About 8 structures belonging to different companies were pulled down on Monday dawn on the authorization of the trade Fair Company Limited. The demolition comes after an injunction that was placed on the exercise was lifted by an Accra High Court on Wednesday, February 12.

When Citi News visited the centre, office items were trapped under the debris from the demolished buildings. Angry workers of the companies were packing what they could salvage.

One of the companies, Madeco Horizon Ventures, had operated in that space for more than two decades. The worried workers could therefore not understand why there wasn’t ample notice prior to the demolition. They said the timing of the demolition is suspicious.

At Colour Planet Limited owned by renowned journalist Raymond Archer, some of the machines were demolished by excavators.

Other companies had a hard time retrieving their items. One of the companies, West Africa Construction and Commodities Limited had to hire an excavator to create a pathway, to enable its workers retrieve some of the items locked in the offices.

This is the second reported demolition at the Trade Fair Centre.

The first happened in 2019, after authorities of the Ghana Trade Fair Company made known plans to redevelop the Centre to make it a modern first class facility.

The demolition halted after the companies secured an injunction restraining the tenant from carrying out the exercise. But this ruling was overturned on Wednesday February 12 this year by High Court in Accra, following an application by the Ghana Trade Fair Company.

Lawyers for the Trade Fair Company argued that the injunction had stalled certain developmental projects and investors in the redevelopment agenda were beginning to lose interest in the project.

The judge, while granting the application, stated that the continuous stay of the companies on the land is causing financial loss to the state. The affected companies have so far filed an appeal against the ruling, as well as a stay of execution which are yet to be heard.

While they pack out, they await the result of a substantive case in which they are demanding among other things their inclusion in the redevelopment plan by the company.

Management of the Ghana Trade Fair Company Limited was unavailable for comments on the matter. However, some documents available to Citi News suggests that the company in its terms of conditions while engaging one of the companies in 2014, disclosed that there was a master plan for the Centre which will involve the demolishing of structures.

The company was thus advised to use materials that can be easily demolished.

The document also included an agreement that the tenant vacates peacefully upon the expiration of the term granted or when the premises is needed for redevelopment.

Meanwhile, some workers of the affected companies believe there is no justifiable reason for the demolition.

The Trade Fair has for some years now stated its intentions to revamp the facility to restore the once vibrant trading hub to its hay days.

It is for this reason that all of its occupants were asked to vacate the premises in 2018.

According to the management of the company, this was to allow for work to begin on-site.

The occupants were sensitized on the fact that the facility had to be demolished because the current makeshift structures do not befit an international trade fair site.