Officials of Ecobank Ghana at its Head Office in Accra, on Tuesday, July 21, stopped the attempted seizure of the bank’s assets by police officers and bailiffs who were there to enforce a High Court order over a debt the bank owes a private entity.

Some police officers came to the premises of Ecobank HQ at Ridge in Accra to provide assistance to bailiffs which includes Mike Agbemashior, George Tykhonov and Yury Shelkov to execute a writ in which Ecobank Ghana is commanded to make a payment of GHS4 million dating back to the year 2015 to Yuri M Plastics, which is the fourth defendant in the case.

According to the court, the order was as a result of a fraud committed against the plaintiffs.

It therefore indicated that the GHS4 million should be paid to the fourth defendant. 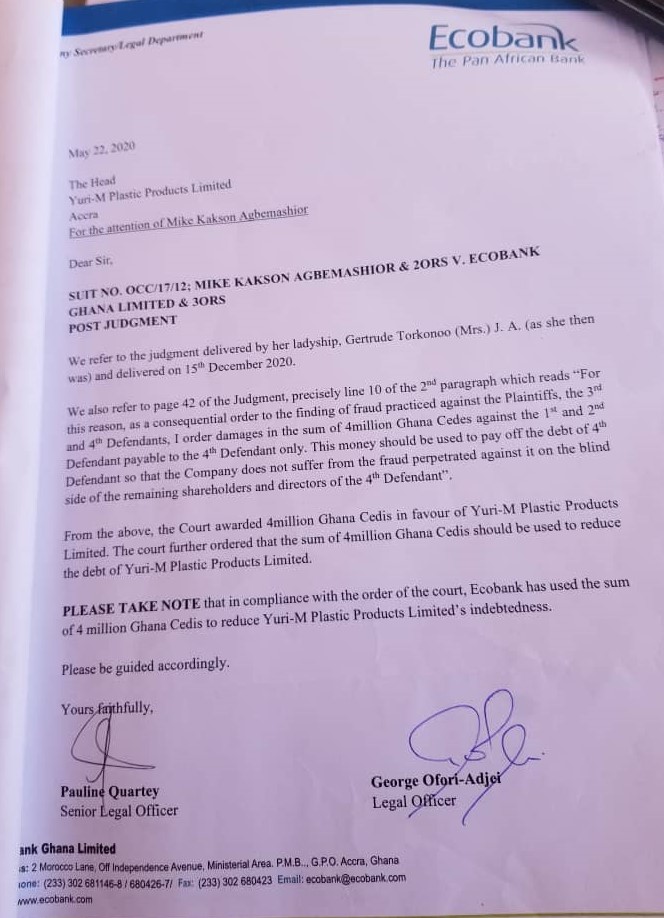 Per information gathered by Citi Business News, an official with the Yuri M Plastic products secured a loan from TTB in the name of the plastic company.

Some directors and shareholders of Yuri-M Plastic Products Limited however sued some of its own directors and shareholders as well as the facility-granting bank (TTB) alleging that they had acted without lawful authority in securing the credit facilities from the bank. The suit succeeded and damages amounting to GHS 4 million were awarded in favour of Yuri-M Plastic Products Limited.

A source at the bank told citibusinessnews.com that the judgment in favor of the plastics company did not set aside the lawful judgement they had earlier obtained against the company, explaining that the GHS 4,000,000 awarded in favor of Yuri- M Plastics Products Limited to be used to offset its indebtedness to TTB (now owned by Ecobank), which order was compiled with.
Functionaries of the plastic company however say they are yet to receive the money and therefore they secured a court order and came with police to seize of the bank’s movable and immovable properties.

However, The Deputy Head of Marketing and Corporate Communications of Ecobank Ghana, Dr. Daniel Kassertee, told the media that the action by the police was wrong.

According to him, Ecobank has filed for a stay of execution at the Commercial Division of the High Court.

“Our attention was drawn to the fact that there was somebody here with the presence of the police and armed men to execute an order. We approached them and realized that was a wrongful attempt to levy an execution, so we legally stopped them and we spoke to the bailiff and they left.”

Dr. Daniel Kassertee however confirmed that the bank had been in court over the payments.

“Certainly, the bank has been in court with a certain individual who was not in court with the bank. He was in court with his own company and also the bank. At the end of the day, the bank was asked to pay some money to the company, not the individual. We have since done that, and the court has fixed a date in October to take a decision,” Mr. Kassertee said.

EDITORS NOTE: An earlier version of this story stated wrongly, that the GHS 4 million judgement had accrued interest of GHS 10,000,000. This has been found to be incorrect and has been expunged from the story. The error is deeply regretted.