Stakeholders in the technology space have urged the government to put in place deliberate structures to support young women entrepreneurs involved in Information, Communication and Technology (ICT).

This, they believe, will positively impact the nation’s development while ensuring employment for many.

Over the years, the issue of inequality in the technology space has been discussed extensively by many groups.

In the early years, women’s participation in the technology field was very discouraging, as it was deemed a difficult field which only men could pursue. But the times are changing, with more women taking on many challenges and rising up the entrepreneurship ladder.

Ghana placed second in the global ranking of countries with the most female entrepreneurs, according to the latest Mastercard Index of Women Entrepreneurs.

The study, which was released in 2019, found that nearly four out of every ten business owners in Ghana are women, the second-highest in the world after Uganda.

As part of efforts to offer guidance and support to young women with new inventions in the technology space, Developers in Vogue, a group focused on helping women who are passionate about transforming Africa and beyond, organised a local start-up pitch summit for such women.

Some of these women shared their start-up ideas with Citi Business News.

“The problem is that we have a lot of waste around which is causing a lot of inconveniences and this is due to delays in pickups. So what we want to do is to bring waste hauliers together by creating an app where we have them on one platform so that clients can go on the app and look for waste hauliers anytime their dustbins are full, so they don’t have to wait for weeks before their waste is disposed of,” said Gertrude Baidoo.

Sandra Amofah also explained that, “The project’s name is Link Up. The idea behind this is just to connect tertiary students together to share different ideas to work on one project and have fun at the same time. So it is just for them to connect on one platform to get access to information needed to build themselves and a brand for themselves.”

Some stakeholders, who have also been in the digital space for years, cited a few challenges that young persons with new businesses face. Highlighting some of them, they pleaded with the government to help tackle these problems.

The Head of Operations and Digital Marketing at The Brandmeister, Therese Jones, blamed the inability for more young people to venture into the technology space on the high cost of internet services in Ghana.

“A lot of the responsibility lies with affordable access to internet. The telcos will definitely have to play a role besides the government. I really hope that the telcos are looking for ways to make internet access more accessible and affordable for Ghanaians throughout the nation. One of the issues that has stunted the growth of Ghanaians right now is the cost of internet. Most people in Ghana are paying more than people in first world countries. Everyone is online, but the cost to get online is still very high compared to what it needs to be.”

The CEO and Co-founder of Digitrust Ghana, Delamazior Nyanyo also said, “The government needs to support a lot more local initiatives. We have a lot of businesses coming up, but there’s not enough support. There’s a lack of trust. Contracts will rather go to bigger companies that are coming from outside Ghana when there are local entrepreneurs that can roll out those solutions also.”

She added, “We should be developing initiatives that would be carried out even when a government changes. Because one thing that you find out is someone starts an initiative and it stops because this party is no longer in power. These initiatives are for Ghana and they are for our growth. So we need to develop initiatives that are sustainable and continuous so we don’t have to rely on a political party.”

They further advised young women in ICT to take up the challenge of making it in the sector.

Therese Jones asserted, “Some of the challenges that I see for women in the tech space is women nothing having access to enough information in knowing what’s available to them. Women need to speak to each other more. They need to speak about other opportunities and they need to find a way to get to these clubs where people have access to information.”

“What we can do in encouraging and bringing up initiatives where women learn how to code is to develop a sense of challenge and self-worth. This is something that we can all achieve,” Delamazior Nyanyo added. 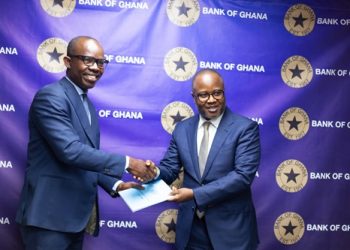 The Bank of Ghana (BoG) and the Cyber Security Authority (CSA) have agreed to improve collaboration and timely information flow...