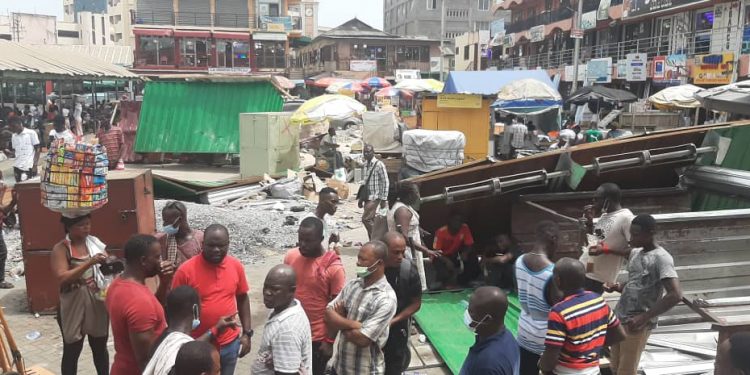 The Ghana Union of Traders Associations (GUTA) intends to later today, meet with officials of the Accra Metropolitan Assembly (AMA) over Monday’s demolition exercise and take-over of stalls at the Opera Square in Accra.

GUTA says the meeting is to unravel circumstances leading to the siting of some containers by an unknown private developer possibly to take over the trading space in the Central Business District.

Although the traders are pointing fingers at the AMA for masterminding the exercise in an attempt to evict them, the AMA has absolved itself from any involvement.

Speaking on Eyewitness News, the Communication Director of GUTA, Joseph Padi noted that the Union will engage the AMA on the way forward.

“We were not aware. The issue was not [just] a demolition exercise; it was just a developer who brought some containers to take over space. It was not an exercise done by AMA just that it was done on their blind side. So we went to the AMA and find out who is embarking on this project, but the Mayor said they were not aware of it. So we are investigating. Today, we will go to the AMA and meet the Mayor at 1 pm to finalize this matter but for now, we have brought everything under control”, he said.

Following the demolition of about 200 shops at Opera Square, the Mayor of Accra, Mohammed Adjei Sowah who denied the assembly’s involvement noted that his outfit will get to the bottom of the matter.

He assured that the Assembly will not take a decision that will hurt Ghanaian traders.

“I have met with the GUTA president and their executives and I have also met the leadership of the affected traders and the understanding is that we should all come to the site and physically look at what has happened over here and take a decision based on that.”

Already, GUTA’s National President, Dr. Joseph Obeng, has urged the affected traders to calm down and allow the leadership of the association to handle the matter.

“I know and believe that you people listen to me as your president, so I will also ask of you to have confidence in us that we will get to the bottom of this issue. So I know it is very painful to see our shops demolished this way but let’s exercise patience and let us get to the bottom of it.”