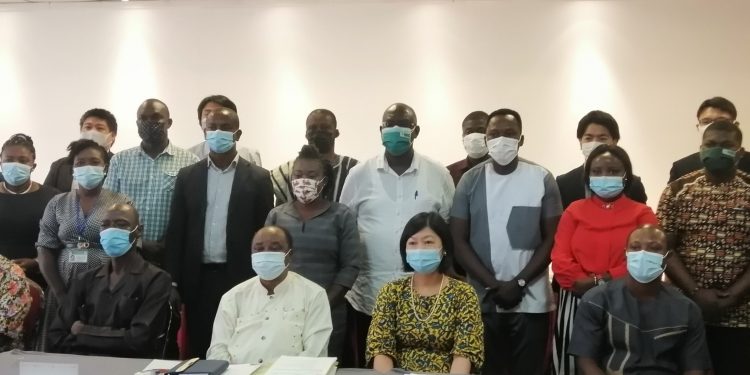 The project to improve the productivity and profitability of rice cultivation at the Kpong Irrigation Scheme has recorded some good successes.

Through the Project for Enhancing Market-Based Agriculture by Smallholders and Private Sector Linkages in Kpong Irrigation Scheme (MASAPS-KIS) in the Eastern Region, the Japan International Cooperation Agency (JICA) is ensuring that rice cultivation increases and stable water distribution is enhanced.

On 3rd March, 2021, JICA, Ghana Irrigation Development Authority (GIDA) organized a seminar to share experiences and implications based on the project

The Project was aimed at enhancing the capacity of GIDA for scheme management in KIS. This included increasing productivity and profitability of rice cultivation among smallholder farmers through strengthening Water User Association’s (WUA) capacity development, dissemination of optimum input for rice cultivation techniques (OiRIC) and entrenching Market-Oriented Agriculture at KIS and in Ghana as a whole in future.

Since 1988, JICA has been supporting irrigated agriculture in Ghana. Between 1988 and 2004, JICA assisted in the establishment of the Irrigation Development Centre (IDC) and the development and dissemination of irrigated farming techniques in Ashaiman in the Greater Accra Region, and later created two model districts in Ashaiman and Okyereko, the Central region.

Between 2004 and 2006, JICA supported GIDA in its nationwide effort to create a sustainable agricultural practice based on the concept of Participatory Irrigation Management (PIM).

In her remark, the Senior Representative of JICA in Ghana, Ms. Maki OZAWA noted: “For more than 30 years, JICA’s cooperation and support for irrigated agriculture in Ghana has enhanced the capacities of both farmers and managers of irrigation schemes across the country, especially at the Kpong Irrigation Scheme, KIS. JICA dedicated the last five years (28th January 2016 – 30th June, 2021) focusing on Market-Based Agriculture for Smallholders and establishing private sector linkages for them and other stakeholders in the value-chain.”

The Project Manager for MASAPS-KIS, Mr. Joseph Nartey (Scheme Manager of KIS), said: “Many thanks to JICA, GIDA, the Government of Ghana and other partners, the Project for Enhancing Market-Based Agriculture by Smallholders and Private Sector Linkages in Kpong Irrigation Scheme (MASAPS-KIS) has achieved some tremendous feats.”

In the presentation, it was shown that in March 2018, two (2) Pilot WUAs were approved for the first time in Ghana in March 2018, and in June 2019, all fifteen (15) WUAs in KIS were registered, and nearly three thousands farmers has been registered as the member of WUA. The collection rate of Irrigation Service Charge (ISC) in KIS has also improved and two (2) Model WUAs in 2019 achieved more than 90% in 2019.

The Chief Advisor for the Project, Mr. Toru Takahashi, also indicated that the average yield of the farmers who were trained under the Project achieved 6,1ton/ha on 2020 Major season and 5.0ton/ha on 2019 minor season, that attained the project target (6.0ton/ha on Major season, 5.0 ton/ha on Minor season). Their average net profit has also increased to more than 2,000GHC/ha after training.

As part of the Project’s Appropriate Cultivation Techniques, farmers were trained on the use of healthy certified seeds, optimum seed rates for direct sowing, variety specific spacing for transplanting, application of optimum amount of nitrogen fertilizer and efficient irrigation water use. They were also trained on record keeping and marketing.

The project helped produce six (6) manuals including a Guideline on the Process for the establishment of Water Users Associations and a Manual for the Operation and Management of the Association. It is expected that these outcomes in KIS will spread to other schemes.

JICA, GIDA, Ministry of Foods and Agriculture have expressed readiness to continue supporting rice cultivation, irrigation schemes and market-oriented agriculture across the country.