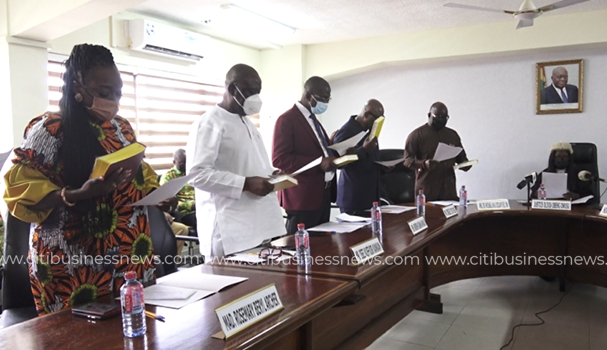 The Minister for Trade and Industry, Alan Kyerematen, has charged the newly sworn-in board of the Ghana Free Zones Authority to work towards achieving government’s target of earning over 25 billion dollars in non-traditional exports.

According to the Trade Minister, this target is one of ten pillars on which the government’s new industrial transformation agenda is hinged.

Speaking at the swearing-in of the board of the Free Zones Authority, Alan Kyerematen tasked the new members to bring their experience to bear in helping government achieve its target.

“The government has launched a very aggressive program for industrialization, which is designed to make Ghana the new manufacturing hub on the continent of Africa. This new industrial transformation agenda is anchored on ten pillars, and three of these pillars have a direct correlation on the work of this organization.”

“One of the pillars is the promotion of export development, which is the core mandate of GFZA. Now that we have launched a new national export development strategy which has a target of achieving over $25 billion in non-traditional value export, this organization is going to lead the efforts,” he said.

For a five-year period; between 2015 and 2019, Ghana’s non-traditional exports grew at a minimal annual average rate of 2.97 percent.

Data from the Ghana Exports Promotions Authority shows that Ghana bagged $2.89 billion from non-traditional exports in 2019.

Latest data from the Bank of Ghana has disclosed that the value of the top 10 non-traditional commodities exported during the second quarter of 2021 amounted to $316.53 million, compared to $273.44 million recorded for the same period in 2020.

The Ghana Free Zones Authority, the agency responsible for facilitating the setting up of free zones in Ghana for the promotion of export development, has been tasked to work towards achieving the set target for the year.

The new board of the Ghana Free Zones Authority is chaired by Alan Kyerematen.