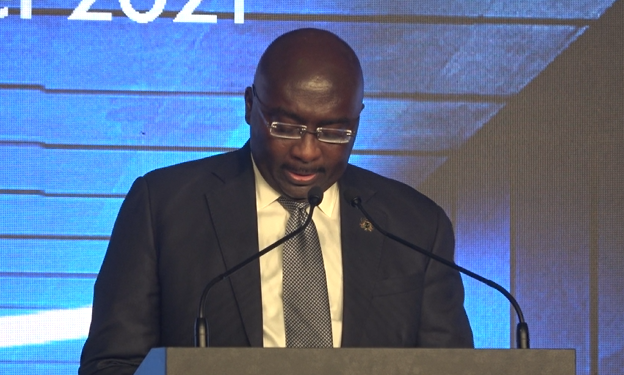 Vice President, Dr. Mahamudu Bawumia, has highlighted the need for a unified effort between stakeholders in Ghana’s fintech space in pushing the use of the universal QR code. This, he said, will fast-track the achievement of the cash-lite agenda.

Ghana is currently going through a digital transformation under the leadership of the government spearheaded by Vice President, Dr. Mahamudu Bawumia.

Dr. Bawumia, speaking at the Standard Chartered Digital Banking, Innovation and Fintech Festival challenged stakeholders in the fintech ecosystem to continue to innovate and compete whilst co-operating with each other.

“Fundamentally, there is no inconsistency between competition and collaboration. I know that many of the stakeholders in our ecosystem, the private sector especially, are very profit-driven. The Central Bank has to jealously guard the safety and stability of the system, and strive to get financial inclusion,” Dr. Bawumia said.

He further said, “If we don’t collaborate, then everybody would be in silos, but once we come together in one ecosystem, then we are able to derive economies of scale from that collaboration, where the whole is greater than the sum of the parts”.

Along the same line, he asked the stakeholders to channel the collaboration spirit into pushing for the growth of the Universal QR code to achieve the cash-lite agenda.

The GhQR code was launched last year to ease the difficulties associated with payment for goods and services as part of the government’s efforts to reduce the use of physical cash.

“When you look at the way Mobile Money Interoperability was executed, we got everybody in this ecosystem on the same platform. Before, you had everybody working in different silos. But once we brought everybody on one platform you now have interoperability, which is actually expanding the pie for everybody. We had GHC35 billion worth of mobile money transactions in 2015; last year it was GHC570 billion, and next year, we are looking towards a trillion Ghana cedis of mobile money transactions.”

“This means rather than competing in our individual silos to share GHC35 billion, we are going to be competing to share a trillion Ghana cedis, and that is where the collaboration does not contradict competition. We can compete and collaborate at the same time, and this thinking is what informed our launch of the Universal QR Code. You can have QR codes for different institutions but if we don’t bring everybody into the same platform, the economies of scale will not be derived.”

Governor of the Bank of Ghana, Dr. Ernest Addison, speaking at the same event disclosed that the Central Bank has invested in digital tools to oversee the effective supervision of financial digital services.

According to the Governor of the Central Bank, the manual supervisory tools have become ineffective in the supervision of digital financial services due to their dependence on digital technology, high frequency and dense data, past data complex and evolving systems, hence the need for the constant investment in supervisory and regulatory technology tools to support banks and fintech companies.

The Standard Chartered Digital Banking, Innovation and Fintech Festival is being done to provide a platform to showcase Ghana’s digital infrastructure and the great strides the country has made on the national digitalization journey.

The Festival, in collaboration with the Bank of Ghana and SC Ventures is under the theme, “Shaping the next phase of Ghana’s financial technology landscape for the 21st century”.