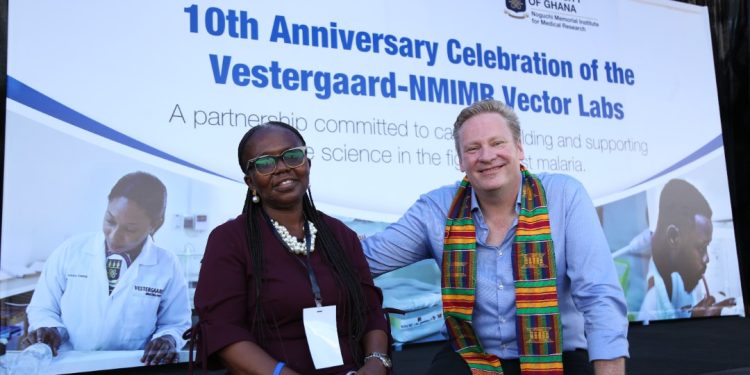 Through research collaborations, VNVL have become vital to insecticide monitoring activities in Ghana and, as the battle against malaria intensifies across sub-Saharan Africa, they are playing a key role in developing complex vector control tools to push the disease towards elimination.

Over its decade in existence, the labs have produced three publications, reared 4,068,208 mosquitoes and conducted more than 800,000 tests. These include stringent quality control tests of Vestergaard’s groundbreaking PermaNet® long-lasting insecticidal nets, the monitoring of insectary colonies and wild mosquitoes for susceptibility, and studies on how different mosquitoes react to insecticides.

In a statement issued by the Institute, Dr. Eleanore Sternberg at the Liverpool School of Tropical Medicine (LSTM), who oversees VNVL’s day-to-day operations, said, “It’s an exciting time in vector control. Everyone cares about getting rid of malaria and this partnership gives us a diverse group of people with different perspectives on how to do that”.

Head of Parasitology at NMIMR, Dr. Irene Ayi, said, “The Noguchi Memorial Institute for Medical Research sees its partnership with Vestergaard as complementary and innovative as it has strengthened and built the capacities of both institutions in the area of vector research and control towards the elimination of malaria and contributed immensely to science in general.”

Research collaboration and mentoring African scientists is key to this partnership. Collaboration with external partners is central to research and innovation and provides VNVL with a bird’s-eye view of both current and future vector control projects in Ghana.

For the last seven years, the VNVL have supported the National Malaria Control Program (NMCP Ghana) to generate data for development of insecticide resistance maps. And since 2016, it has supported the Ghanaian National Insecticide Resistance Monitoring Partnership (NIRMOP) in its annual resistance monitoring activities by offering testing materials and the lab as a training venue for field staff.

“We believe that data generated in Africa should be for the benefit of the continent. It is our responsibility to ensure this locally-generated data serves as a guide for evidence-based decision making – both to optimise the quality of tools we innovate and for the interventions endemic countries should consider,” said Vestergaard Chief Executive Officer, Michael Joos.

The VNVL have also trained 14 scientists, including 6 women and 15 university graduates, through the Ghana National Service Scheme. Most of the staff employed are graduates of Ghanaian universities, which demonstrates the success of the partnership with the VNVL in developing young scientists.