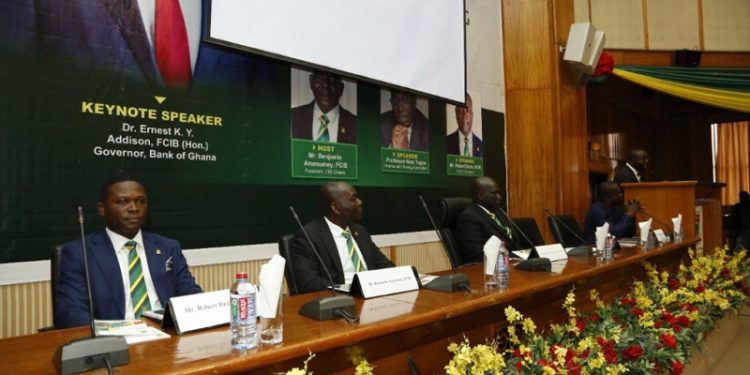 He said while crisis destroyed bad companies, good companies survived them, and great companies were improved by them.

At the 26th annual banking conference organised by the Chartered Institute of Banking Ghana (CIBG), he said the economic environment was now characterised by uncertainty and the risk of failure had increased for many companies, including banks.

“Recognise that the crisis can present the biggest opportunity in a lifetime, do not double down on the traditional business, be proactive.

“Don’t take a wait-and-see approach to the opportunities. Use a two-track process to make today’s business more resilient while creating tomorrow’s new growth business,” he advised the banks.

He urged banks to look for alternative growth paths that would help them to survive and prepare for back to normal recovery.

Prof Tagoe also advised banks to respond to their customers according to the category in which they fall.

“For customers who are not cash rich, the banks should support them to survive the short-term pressures and help them prepare for new normal,” he advised.

He said banks need to support firms to survive short-term pressure and look for new growth paths, adding that firms which will delay in finding new growth paths might end up on banks non-performing loans (NPL).

“In a period of rapid change and increasing complexity the banks which win are those that will learn faster than the rate of change and than their competitors.

“Banks which succeed in the crisis will need to master resilience and innovation,” he said.

Speaking on the theme for the conference; ‘the Future of Banking in Ghana: Ethics, Professionalism and ESG imperatives’, the Governor of the Bank of Ghana, Dr Ernest Addison, in a speech read on his behalf, said banks in the country had so far demonstrated their commitment to incorporating Environmental, Social and Governance (ESG) principles into their operational frameworks.

He said all the 23 universal banks have this year completed and submitted a template developed by the regulator in addition to its Sustainable Banking Principles and Sector Guidance Notes, to enable banks accelerate their ESG-compliance journey.

This, he said was an improvement on the number presented in September last year, and believes the development was good for the industry and the wider economy’s long-term sustainability.

He urged the stakeholders in the industry not to treat the guidelines and directives as mere checklists, but ensure that they were implemented as intended.

“The business of banking is evolving rapidly, hence there’s a need to be intentional in strict adherence to individual codes of ethics and professionalism; as well as the CIB and Ghana Association of Bank’s code of ethics and banking practice in our various banks,” he stated.

For his part, the Chief Executive Officer at CIBG, Robert Dzato, said the institute, as the foremost trainer of bankers, had begun an extensive programme to ensure bankers were well-equipped in ESG guidelines.

“Our role at CIB is to educate, and currently we are running a programme in partnership with the International Finance Corporation (IFC) to train bankers in ESG,” he stated.

He said ethics and professionalism would be permanent features of the programme.

Bank will continue to comply

The CEO of the Ghana Association of Banks, John Awuah, who was the chairman for the conference, said banks would continue to comply with the prevailing sustainable banking regulatory provisions as well as lead conversations around the subject.

He said efforts were being made to make Ghanaian banks aware of the need for sustainable banking principles.

“We have made efforts already together with the Bank of Ghana to have a roadmap for all member banks to pursue in achieving this. And so if you listen to the speakers, it tells you Ghanaian banks are so much in line with the global target for ESG.

“We believe that it is important as a bank to have ESG as part of our operations because sustainable banking is the way to go in the current situation”, he stated.