by Richard Annerquaye Abbey
in Asia, INTERNATIONAL, US 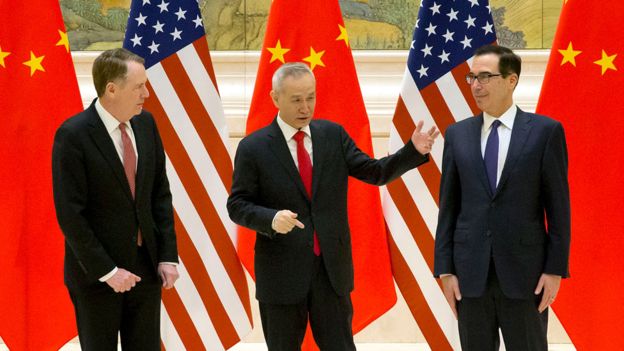 US President Donald Trump has said he is in “absolutely no rush” to finalise a trade agreement with China, hours after the US more than doubled tariffs on many Chinese products.

He said bilateral talks, due to resume in Washington later on Friday, were continuing in a very “congenial” way.

The US action, a sharp escalation of the countries’ damaging trade war, took tariffs on affected Chinese goods to 25% from 10%.

China said it would retaliate.

It said it “deeply regrets” the move and would have to take “necessary counter-measures”.

Only recently, the US and China appeared to be close to ending months of trade tensions.

The US has raised tariffs on $200bn (£153.7bn) worth of Chinese imports, while Mr Trump said a process had begun to place the full 25% tariff on a further $325bn of Chinese goods.

The $100bn of tariffs taken in would be used to buy US agricultural goods, which would then be used for “humanitarian assistance”, President Trump tweeted.

Critics pointed out on Twitter that it is not China who will pay the taxes, but US importers, and ultimately its consumers.

China’s Commerce Ministry confirmed the latest US tariff increase on its website.

“It is hoped that the US and the Chinese sides will work together… to resolve existing problems through co-operation and consultation,” it said in a statement.

Chinese stock markets rose on Friday, with the Hang Seng index up less than 1% and the Shanghai Composite more than 3% higher.

However, earlier in the week stock markets had fallen after US President Donald Trump flagged the tariff rise on Sunday.

The US imposed a 10% tariff on $200bn worth of Chinese products – including fish, handbags, clothing and footwear – last year.

The tariff was due to rise at the start of the year, but the increase was delayed as negotiations advanced.

What will be the impact of the tariff rise?

The US-China trade war has weighed on the global economy over the past year and created uncertainty for businesses and consumers.

Even though Mr Trump has downplayed the impact of tariffs on the US economy, the rise is likely to affect some American companies and consumers as firms may pass on some of the cost, analysts said.

Deborah Elms, executive director at the Asian Trade Centre, said: “It’s going to be a big shock to the economy.

“Those are all US companies who are suddenly facing a 25% increase in cost, and then you have to remember that the Chinese are going to retaliate.”

The American Chamber of Commerce in China said: “While we are disappointed that the stakes have been raised, we nevertheless support the ongoing effort by both sides to reach agreement on a strong, enforceable deal that resolves the fundamental, structural issues our members have long faced in China.”

“There is no greater threat to world growth,” Mr Le Maire told CNews.

BBC economics correspondent Andrew Walker said the direct impact of the trade dispute would be on the US and China.

He said there was economic research suggesting that US tariffs hit American consumers, not Chinese exporters, as President Trump argues.

There could also be wider implications, he added.

“Any softening of demand among Chinese and American consumers and businesses is likely to affect their suppliers.

“To take some possible examples, China is a key market for metals and energy exporters and for suppliers of industrial machinery such as Germany. The US is a key buyer of consumer goods,” our correspondent said.

“These two markets won’t dry up, but they could be a little weaker as a result of any economic hit from the tariffs.” 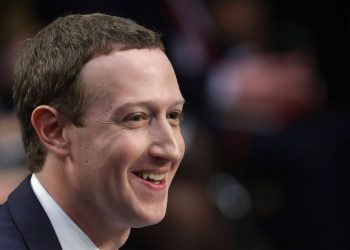 Facebook founder and CEO Mark Zuckerberg's net worth surpassed $100 billion for the first time on Thursday after the company...

AngloGold Ashanti CEO to step down