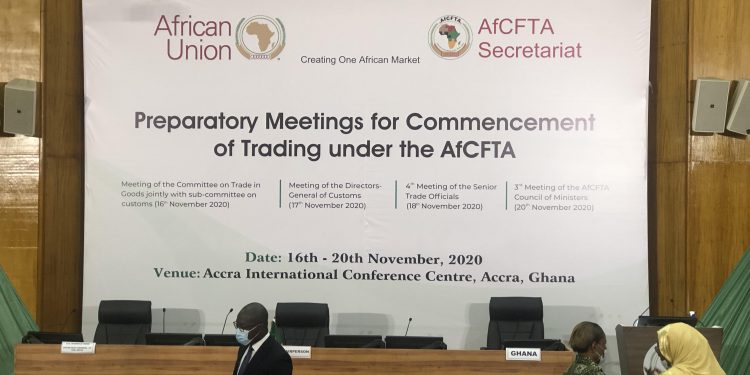 The African Continental Free Trade Area (AfCFTA) Secretariat has begun its first meeting of the Committee on Trade and Goods.

Concurrently, the subcommittee on Trade Facilitation Customs Cooperation and Transit is also meeting.

In an interview with Citi Business News, Head of AfCFTA Affairs at the Customs Division of GRA, Fenchi Akoto, indicated that the meeting would help member countries communicate their readiness for the implementation of the trade agreement.

He stated that, “We are going to look at items like how prepared the various countries are, what have we put in place in preparation towards the operationalisation of the AfCFTA, besides the institutional preparations, and what real things do you have on the grounds. We expect each member country to tell us what they have in place come January 2021; what is there to tell us you are ready for trade.”

The key issues of the meeting include the activation of the implementation structures; adoption of National Strategies and establishment of National Institutions. It also includes Preparation and Dissemination of AfCFTA Trade Documents, and Awareness and Capacity in the relevant Regulatory Authorities and among Economic Operators.

AfCFTA is an agreement among 54 African countries set to commence in January 2021. It has an estimated potential of boosting both intra-African trade by 52.3 percent by eliminating import duties.

The agreement seeks to establish a single market for goods and services across 54 countries, allow the free movement of business travellers and investments, and create a continental customs union to streamline trade – and attract long-term investment.

With a combined market of over 1.2 billion people (which is expected to grow to 2.5 billion by 2050) and a GDP of $2.5 trillion, AfCFTA could potentially make Africa the largest free trade area in the world since the formation of the World Trade Organisation.

The Secretariat will administer the free trade agreement for creating a single market across member countries.