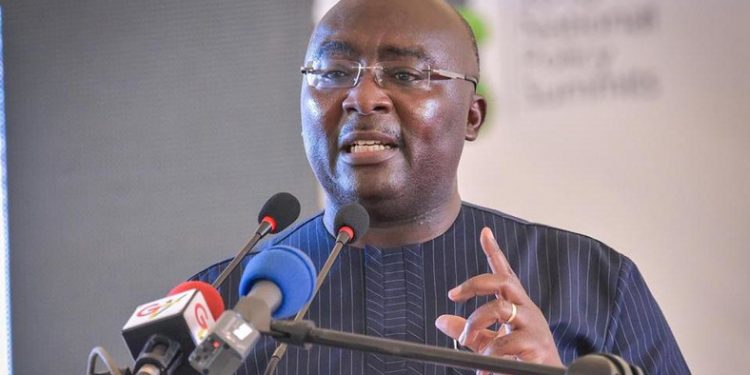 160
SHARES
2k
VIEWS
Share on FacebookShare on TwitterShare on Whatsapp

Vice President Dr Mahamudu Bawumia on Wednesday out doored the Youth Employment Agency’s (YEA) Job Centre and three other supporting initiatives, to facilitate sustainable employment for both skilled and unskilled Ghanaian youth between the ages of 15 and 35 years.

At the launch of the four initiatives in Accra, held on the theme: “Connecting the Youth to Job Opportunities,” Vice President Bawumia explained that the Job Centre was an online platform (www.yeajobcentre.gov.gh), which would connect job seekers to potential employment providers in the public and private sectors of the economy.

The centre, he said, would also assist job seekers with career counselling and training services, curriculum vitae preparation, Agency placement and a walk-in hub that will provide other auxiliary services to job seekers.

The event brought together Ministers of State, Chief Executive Officers of State-Owned Enterprises, Development Partners, the Diplomatic Community, YEA Youth Ambassadors, captains of industry and young entrepreneurs across the country.

Explaining the Artisan Directory, Dr Bawumia said it would train and provide start-up tools and capital to artisans, including; beauticians, plumbers, masons, carpenters and fashion designers, and link them up to the market, in order to sell their crafts and services.

The Agriculture-based Flagship Project, the Vice President said took cognizance of the natural endowment and comparative advantage of the various regions and districts, and government would support the youth to venture into maize farms, fish farming, smock village, cassava and plantain production, geared towards ensuring sustainable jobs and building a resilient economy.

He said 10,000 youth would be engaged in the first year of the programme and thus, commended the Board and Management of YEA for establishing a maize plantation at Wenchi in the Bono Region and fish farm in the Volta Region towards practicalising the vision.

The fourth programme “Work Abroad Programme,” Dr Bawumia explained would enable the nation to export young professionals, including; nurses, teachers and other expertise abroad, which would earn Ghana additional foreign exchange as well as ensure cross-exchange of ideas and technology.

He noted that 1.2 million students had benefitted from the Free Senior High School Policy, while 100,000 graduates were recruited under the Nation Builders Corps.

He added that the government had restored nursing and teacher trainee allowances, abolished 17 nuisance taxes in 2017 and had so far, employed 350,000 people into the public sector since assuming the reins of government.

He, therefore, urged corporate entities in the country to support the YEA’s initiatives to succeed in order to reduce youth unemployment to the barest minimum and stimulate economic growth.

The programme, he said, offered various modules including; Community Policing, Community Nursing, Youth in Forestry, Youth in Sanitation and Community Teaching Assistance, with about 600,000 youth benefitting so far.

However, he said, the new management of the YEA, upon assumption of office in 2017, reviewed the programme for the strategic direction and made some recommendations that would ensure sustainable jobs for both skilled and unskilled youth.

He said, for instance, the Job Centre would enable the Agency to gather data and other relevant information on youth unemployment for policy decision-making and ensure demand-driven job training.

Mr Samuel Awuku, the Board Chair of the YEA, for his part, said the International Labour Organisation’s recent statistics revealed that one-fifth of the world’s youth were either unskilled or unemployed.

Additionally, 60 percent of the youth in Africa were unemployed, with six million youth entering the labour market in Sub-Saharan Africa annually.

He believed that if the various African governments properly harnessed the intellectual abilities of those youths, it could lead to the economic transformation of those countries and engender economic growth.