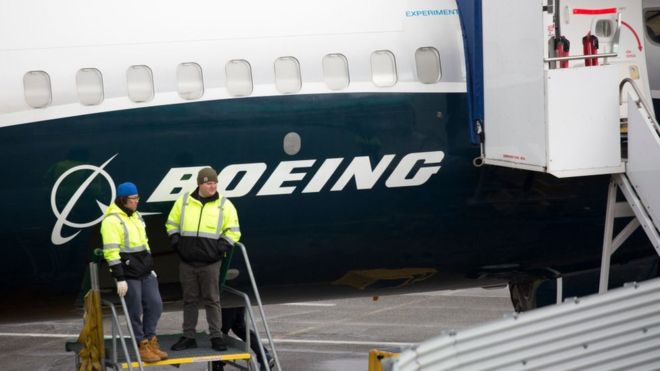 Boeing employees exchanged instant messages about issues with the automated safety system on the 737 Max as it was being certified in 2016.

In documents provided by Boeing to lawmakers, a pilot wrote that he had run into unexpected trouble during tests.

He said he had “basically lied to the regulators [unknowingly]”.

The safety system has been tied to two deadly crashes that killed 346 people.

It raises fresh questions about how much the company was aware of the problems with the 737 Max – before the crashes.

An Ethiopian Airlines 737 Max crashed only minutes after take-off from Addis Ababa in March, killing all 157 people on board.

The same type flown by the Indonesian airline Lion Air crashed into the sea only five months earlier in October 2018, shortly after taking off from Jakarta. That accident claimed the lives of 189 people

The Federal Aviation Administration (FAA) called the document “concerning” and said it was asking Boeing for an “immediate” explanation for the delay in turning over the documents, which Boeing provided to lawmakers ahead of hearings this month.

Boeing boss Dennis Muilenburg is due to testify. He was recently stripped of the title of chairman of the company, though he remains chief executive.

Boeing said it is cooperating with the investigation of the 737 Max, which has been grounded globally since March following the crashes. The company recently announced a permanent safety committee to oversee the development, manufacturing and operation of its aircraft and services.

“We will continue to follow the direction of the FAA and other global regulators, as we work to safely return the 737 MAX to service,” Boeing said.

Investigators of the crashes in Ethiopia and Indonesia have focused on the role played by a software system called MCAS (Manoeuvring Characteristics Augmentation System), which was designed to make the aircraft easier to fly.

Inquiries have shown the software – and the failure of sensors – contributed to pilots not being able to control the aircraft.

Boeing has blamed the crashes on erroneous data fed into the system. It has said it is revising the plane’s software to improve safeguards.

But reviews have criticised Boeing and the FAA for inadequate oversight of the risks associated with the new software system.

Boeing reportedly uncovered the messages, which date to 2016, “some months ago”. The pilot no longer works for the company.

In response to the pilot’s message, the other Boeing employee wrote: “It wasn’t (sic) a lie, no one told us that was the case”.

Shares in the company dropped more than 5% on Friday following the reports.