in Banking And Finance, FEATURES 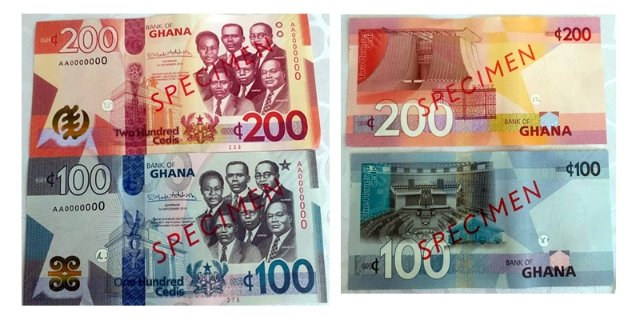 The Bank of Ghana (BoG) on November 29th, 2019, released a document justifying the need for the introduction of “higher-value denomination” currency (HVD) notes.

The question of whether HVD notes are warranted at any point in time is not a merely conceptual one. It is, in fact, a highly empirical enquiry to be approached from a careful analysis of considerable amounts of data about the proportional use of different notes and the differential costs of security and distribution. One cannot have random opinions about such a subject and expect to be taken seriously.

I don’t have any data on the contemporary usage patterns of the different Ghana Cedi (GHS) notes in circulation or about the costs of printing different notes. Like most Ghanaians, therefore, I did not have too much difficulty delegating all thinking about the issue to the fine technocrats at the central bank. Until now.

A bunch of controversies arising from the refusal of major supermarkets and even banks to accept the new notes because they lack the means to validate their authenticity compelled me to finally take a look at the BoG’s explanatory documents today. After all, item authentication has been a decade-and-half interest of mine.

Having now read the BoG document and subsequent BoG press releases on the subject, I am suddenly completely unsure of my earlier faith in the central bank to do all our thinking for us in this matter. I will simply lay out the worrying things I found and let readers of this blog judge for themselves.

The most problematic element of the BoG’s analysis is the central reason it offers for introducing the HVD notes. In the very first paragraph of the original Q&A-formatted release, it states as follows:

High levels of inflation and currency depreciation in the past have eroded some of the gains from redenomination. The deadweight burden, reflected in high transaction cost has re-emerged.

In this one statement is contained all the alarm bells about the depth of technical preparation that should have gone into this exercise.

Except in cases of hyperinflation and hyper-depreciation requiring a new currency series, high-value denomination notes are almost never justified by the need to counter or offset routine inflationary pressures over time.

For example, when the $100 was first introduced in the US in 1869 (and reintroduced as a federal reserve note in 1914), it was for a time the highest in circulation. In due course, larger denominations surfaced, mostly as a result of wartime and other contingent exigencies.

By 1946, a firm decision to stop the issuing of HVD notes had been taken and, by 1969, all currencies higher than $100 were being removed from active circulation to reduce the costs of fighting counterfeiting and money laundering. Today, the $100 bill is worth only $4 if measured against its original value as a result of cumulative inflation.

It remains the highest denomination in circulation purely in keeping with contemporary policy. An alternative policy of trying to preserve the face value of the $100 note at the time of the 1969 currency reforms would have required an introduction of $1000 and $2000 bills in the United States, something that cannot be countenanced in today’s anti-terror and anti-narcotics climate.

It is easier to understand the argument when one recalls that in a floating exchange regime, currencies can rise and fall over time. Is the logic here then that should the Ghana cedi strengthen against the USD consistently over time, that would dictate the retirement of the largest of the HVD notes?

Yet, ahead of the latest round of managed devaluations in 1982, the highest note, the 50 cedi note, had been removed from circulation (or “demonetised”) ostensibly as an anti-corruption measure (echoing an earlier currency confiscation in 1979).

When in 1984, the HVD notes of 50, 100, and 200 cedis were introduced (or, in the case of 50 cedi note, reintroduced), with no serious explanation as to why fears of corruption were no longer an issue, the effective worth of the highest-value note was officially $5.

By the time of the 1985 budget, it was $3.7. More interestingly, the parallel unofficial, in actual fact market, rate was about 156 cedi/USD suggesting hence that the 50 cedi note that just 10 years earlier had been nominally worth $50 was now worth just 32 US cents ($0.32) whilst the highest-circulating note was worth just $1.28.

In short, the history of “face value preservation” tactics and politics in Ghana betrays a ridiculous mixture of arbitrariness and confusion. Trying to bulwark the face value of Ghana’s benighted national currency notes against depreciation and inflation trends is clearly to court absurdity, and also distrust in view of this messy track record.

At any rate, the historical record clearly shows that Ghana’s highest-value notes have for the most part generally exchanged for low dollar amounts. In the 1985 to 1990 period, the 500 cedi note moved from $5.5 to $1.5, peak to trough.

The dramatic change of affairs represented by the introduction of the 50 Ghana cedi note in July 2007, with its debut value of $54 marking the high point of Ghanaian currency face-value politics in 30 years, was a break with the past precisely because it also marked the start of a new series, effectively a new currency.

Such an exceptional development cannot set a precedent for the routine preservation of the currency’s purchasing strength at some arbitrary USD rate by printing larger and larger notes to approximate the continuous appreciation of the highest notes’ nominal value(s).

By the time of the introduction of the 100 and 200 Ghana cedi notes in late 2019, the value of the 50 Ghana cedi note in USD terms was about $9. In comparison with other HVD notes in Ghana’s history, adjusting for both US and local inflation, this amount, as has already been shown above, was big enough.

2. The BoG makes plausibly persuasive points about an expansion of incomes leading to an increase in preference for the then highest-value notes, the GH¢20 and the GH¢50. In the European common market, for instance, it is the 50 euro note, not the higher value 100 and 200 euro notes (or the 500 euro notes that are being demonetised over the usual concerns) that are in widest circulation.

In the US, the highest circulation bill is the $20, whilst the highest value ($100) bill is mostly preferred outside the US.

Thus, the preference for higher-value notes in Ghana is a significant point. However, the point in the way it was put in the BoG release, that “GH¢50 and GH¢20 account for about 70% of the total demand”, is completely vague.

Is this “demand” being expressed in monetary value or quantity terms? If in value terms, then it is completely unremarkable since the face value being several multiples of the face value of the lower denomination notes, their quantity could well be tiny and still constitute 70% of usage.

In such a scenario, the need to print larger quantities would be far from clear, and user preference may well tilt to a medium portion of the value spectrum as is the case in many other countries.

3. It is important in connection with the above point to note that convenience is affected by both the concern about carrying large sums of low-value notes and the, almost converse, concern about finding change when counterparties pay for goods and services with large notes.

Thus, preference is an entirely empirical matter and rather technically complex to compute. If the BoG wished to educate the public in this matter by releasing that statement, it ought to have been clearer.

4. Most strangely, the BoG chose to provide none of the critical information that would have best assisted curious persons in evaluating the propriety of its decision to introduce high-value denominations against the global trend of demonetizing high-value notes.

At the heart of any sound analysis would be a trade-off between printing less money (and the concomitant result of users carrying less money) and creating highly tempting targets for crime.

At the same time, such notes are more expensive than lower-value notes because they require more security features to prevent counterfeiting and more policing to suppress money laundering. For example, in the US, the most expensive notes (such as the $50 bill) can be as much as four times (4x) costlier to print than the cheapest ones (such as the $1 bill).

The right balance between transactional convenience and policing cost is, as always, entirely empirical. By refusing to provide a breakdown of the costs of printing the different bills and the quantities in circulation as well as the average velocity per class and other critical monetary parameters, the BoG shows a complete disinterest in helping analysts come to any sensible conclusions about the need for these new HVD notes.

6. Lastly, we live in a time of great cynicism about the procurement practices of governments. The introduction of a new class of currency notes represents a potentially major procurement opportunity for agents and representatives of the mints and printing presses in Europe and America with whom the Republic of Ghana deals on these matters.

Where the new bills are significantly more expensive than older bills, commissions may be in order, opening the door to unpleasant allegations about the real motives impelling the procurement action.

It would have been reassuring had the BoG provided information about the procurement terms of this new production, whether by De La Rue, the loss-making, financially struggling, security printing firm or Crane Currency, the controversy-plagued contractor, now embroiled in corruption allegations in Liberia.

The decision to shroud all these important matters in silence, including even the name of the printer/mint, is doing very little to dispel lingering doubts and confusion about this whole HVD notes printing business.