Dissolve TOR board within one week – Staff to Nana Addo 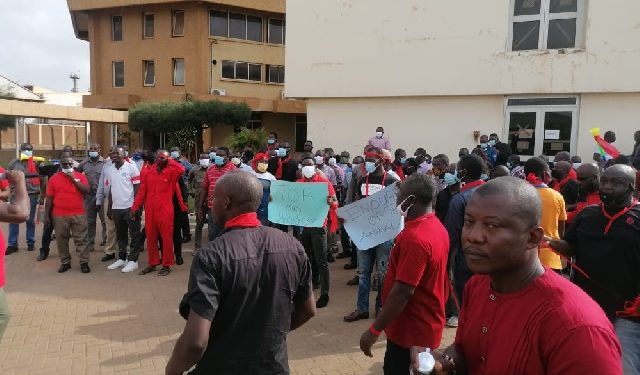 Workers of the Tema Oil Refinery (TOR) have given the President a one-week ultimatum to dissolve the board of the company.

The staff say the board must be dissolved over its incompetent management of the refinery.

The workers made the demand when they staged a peaceful protest on Wednesday, November 4, 2020, at the company’s premises.

Among other things, the workers say the board has made no significant contribution to the growth of the company.

A local reporter, Carlos Atsu who was at the scene said many of the workers were clad in red T-shirts and armbands to register their displeasure.

They also wielded placards some of which had inscriptions such as “The Board must go” among others.

Aside from the minimal production that goes on in the refinery as and when there is a contract, the workers say, there hasn’t been any major production for close to two years hence their call for members on the board to be sacked.

Chairperson of the Ghana Petroleum Chemical Workers Union, Serwaa Duncan Williams who spoke to Citi News indicated that operations at the company can also be revamped if the current members of the board are dismissed.

“The Board is incompetent, as far as the workers are concerned, the board has not been fair to us. There is nothing we can boast of for the past four years that they have been in office. So we want the government to dissolve the board. Now, we are owing a lot of people in terms of utility bills, GRA and our pensioners are at home without receiving any payment and it all happening under this board. All they say is that there is no money. If they are unable to manage the company, then they are not supposed to be here. The government must dissolve it as soon as possible”, she lamented.

Here is a separate statement issued by the unionised staff:

Tema Oil Refinery, as a strategic national asset, was established in 1963 to enhance the country’s investment and provide quality energy products and services to power Ghana’s economic growth in an environmentally sustainable manner.

It is instructive to note that at the time TOR was built, crude oil had not been discovered in commercial quantities, but hoped would one day be a possibility.

Thankfully, in 2007, this dream was realised and commercial production started in 2010.

Among the other strategic reasons were national security, and for value addition to raw materials.

With the company’s net worth of almost $1.3billion, there is no explanation or excuse whatsoever for the story of continuous financial distress.

Even at the current processing capacity, we should project not less than between $3million on a 1million parcel of crude oil in addition to more revenue we could derive from our storage facilities and other service charges.

The workers’ leadership made proposals on revenue generation to the management, which led to the formation of different committees that established various reports. In discussing the committees’ reports with management, Special EXIM, the unions were sacked from the Exim table over the implementation of the committee report, which was to improve profit margins and some of the reports that didn’t need a single resource to implement.

When the unions were sacked, we were told that they (management) are paid to do that, so they will own and implement it. But after two years, these reports have not been implemented, yet they are sitting in their comfort zone telling us the cash flow is bad.

The first day the union’s leadership met the current Managing Director on 22nd May 2020, we presented a blueprint to him that bordered on revenue generation, which he considered as laudable

(From his own words – a jolly ride) but he did not demonstrate his commitment to it.

The Management of TOR has not been able to secure continuous supply of crude oil for processing, and the idling state of the plants is a serious maintenance cost as well.

WE CANNOT SEE THE TOR MANAGEMENT RESPONSIBLE ENOUGH AND MANAGING WITH PRUDENCE.

Under the oversight responsibility of the BOARD, this has been the picture of TOR:

Nothing has been done on the long-standing indebtedness to GRA, SSNIT, ECG, Ghana Water Company, owing everywhere and adding on to the debt.

For the first time, the Board and Management could not assure workers of future prospects of revenue inflows.

Retirees’ end-of-service benefit payments continue to be in default.

For the first time, Provident Fund payment is always in default.

The BOST margins have been increased and passed by Parliament, but the Board of TOR could not secure a similar deal for us.

State-owned organisations got some financial relief, as a result of the COVID-19 [pandemic], but the Board of TOR could not secure a similar deal for us.

No new project or initiative has been undertaken since coming into office.

The Board has failed to secure partnership from several investors who had expressed interest in expanding the refinery capacity between 100,000 to 150,000 BPSD.

The Board, as eminent as they are, have not been able to exert its influence on NPA, in order to collect already received money paid by all Ghanaians to be used for recapitalising aspects of TOR

The Board, together with Management, has not proven commitment and sense of urgency in improving the fortunes of the refinery.

Under a much-better BOARD, the government, through GRA, should be having timely payment of tax revenue to undertake other developmental or social programmes to the benefit of all Ghanaians.

ECG, Ghana Water Company, and many other entities should not have their revenue locked up in TOR, and that could improve the services they render to all Ghanaians.

THE BOARD HAS FAILED TOR!

THE BOARD HAS FAILED THE PRESIDENT!!

THE BOARD HAS FAILED GHANAIANS!!!

THE BOARD MUST BE REMOVED!!!!