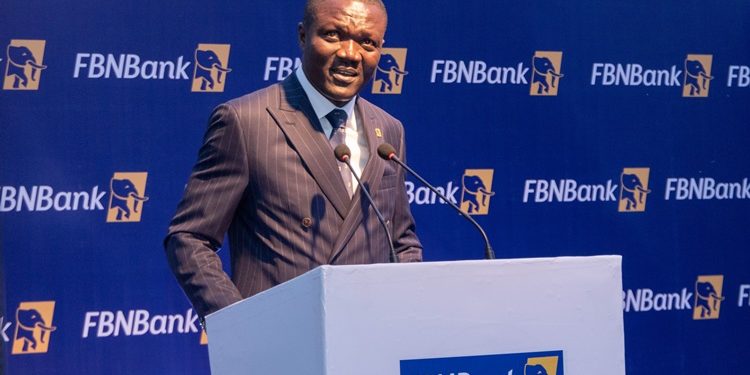 The Managing Director and Chief Executive Officer of FBNBank Ghana Limited, Victor Yaw Asante has stated that the appointment of Dr. Ngozi Okonjo-Iweala as Director-General of the World Trade Organisation (WTO) coming at a time when AfCFTA is being rolled out across the continent is a good sign for Africa’s trade.

Speaking to participants at the recently held “[email protected] Business Forum,” Mr. Asante mentioned that “the excitement about Dr. Okonjo-Iweala’s appointment should not be limited to her being an African and a woman but most importantly to the fact that her appointment, coming at a time when the African Continental Free Trade Area (AfCFTA) is being rolled-out, bodes well for Africa’s trade within the continent and with the rest of the world. It is fantastic news for Africa.”

He explained that “I am delighted and very confident that Africa’s trade is going to see some exciting developments considering Dr. Okonjo-Iweala’s track record. In the last 30 or more years she has garnered a rich wealth of experience across the globe, holding key positions in the World Bank, on the African continent, in government in Nigeria, in business, in academia and on several local and international advisory boards and groups. She is the recipient of many awards and is also an author. In many ways and in different roles, Dr. Okonjo-Iweala has not just broken glass ceilings but also masterminded or midwifed significant positive developments. It is her ability to bring about positive developments which should give us a sense of great expectations in the wake of the commencement of AfCFTA”.

The African Continental Free Trade Area (AfCFTA) came into effect on Friday, January 1, 2021 and is the largest trade area in the world in terms of participating countries since the formation of the World Trade Organization. It has 54 members-states of the African Union (AU) as signatories who have agreed to open up their markets commercially for mutual access and benefits. It is estimated to have a combined gross domestic product (GDP) valued at US$3.4 trillion with 1.3 billion consumers across the beneficiary-countries.

With Dr. Okonjo-Iweala’s appointment to the helm of affairs at the WTO, there is the expectation that policies, actions and programmes undertaken by the international organisation under her leadership would usher in a period of improved engagement and benefits for Africa within the continent and also with the rest of the world. Through her new role, and AfCFTA’s implementation across Africa, the continent should be in a stronger position, relying on the collective coordinated advocacy of AU members at the WTO, to compete on the world market, pushing for more trade rather than foreign aid among other expected benefits.

On Monday, February 15, 2021, the members of the WTO unanimously elected Dr. Okonjo-Iweala as the organisation’s seventh Director-General. Her term begins on Monday, March 1, 2021 and is renewable when it expires on August 31, 2025.

In her statement in acceptance of her appointment, Dr. Okonjo-Iweala said “Today, WTO Members are making history. For the first time in the seventy-three years of GATT and WTO, you are selecting a woman and an African as Director-General. This is ground-breaking and positive. I am grateful for the trust you have in me, not just as a woman and an African, but also in my knowledge, experience, and, as some of you have said, possessing the courage and passion to work with you to undertake the wide-ranging reforms the WTO needs to reposition itself for the future.”

She added that “at the WTO, the DG leads from behind working with the talented secretariat staff to help Members achieve results. You can count on me to be proactive, to work hard, to be balanced, fair, professional, and objective, so as to continuously earn and sustain your trust. That way, together, we can restore and rebrand the WTO as a key pillar of global economic governance, a force for a strong, transparent, and fair multilateral trading system, and an instrument for inclusive economic growth and sustainable development.”

On January 6, 2021, days ahead of her appointment, Dr. Okonjo-Iweala shared her excitement and support for AfCFTA by posting a message on Twitter drawing attention to President Akufo-Addo’s message on the commencement of the continental free trade area. She said “As Africa rings in and begins implementation of the African Continental Free Trade Area, a passionate rendition of the potential by Ghanaian and ECOWAS (CEDEAO) President, Nana Akufo-Addo. Take a listen.”