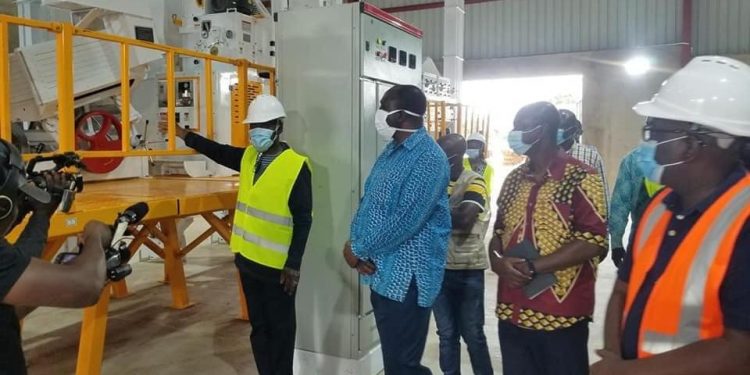 As parts of efforts by the government to boost productivity and increase job opportunities, the government with funding from the African Development Bank through the Agricultural Commodity Processing Development of the Rural Enterprise Program (REP) have started a rice Processing Factory in Sefwi Akontombra in the Western North Region.

The factory- Sefwi Akontombra Rice Processing Factory, which is 65 percent complete is part of President Akufo-Addo’s One District One Factory initiative.

Farmers within the area have expressed excitement over the progress of work on the processing factory.

According to them, over 200 acres of land have been earmarked to produce enough rice for the factory.

The farmers say the factory has provided jobs for about 600 of them.

They are thus confident of producing enough rice to feed the factory all year round once the factory begins production.

Speaking to Citi Business News, Lawrence Tetteh, spokesperson of the Rice Farmers Association in the Western North Region said, “This factory is for us. We know for sure that the factory is there for the members of Akontombra to harvest good rice. We are happy about that, and we will also do our best to supply the factory with the needed rice so that we can support the factory to grow. We thank the President for the good initiative, he brought to us over here at Akontombra,” he said.

Inspecting the factory, Minister for Trade and Industry, Alan Kyerematen explained that the initiative forms part of efforts by the government to enhance productivity as well as create jobs.

According to the Minister, GHS6.6 million has been invested in the factory in order to enhance productivity.

He also noted that government is empowering farmers who otherwise would have absolutely no opportunity to be able to raise funding from a bank to establish a processing facility.

The National Director Of the Rural Enterprise Program (REP), Kwesi Arthur Antwi also indicated that his outfit has exceeded the over thousand jobs they expected to create under REP.