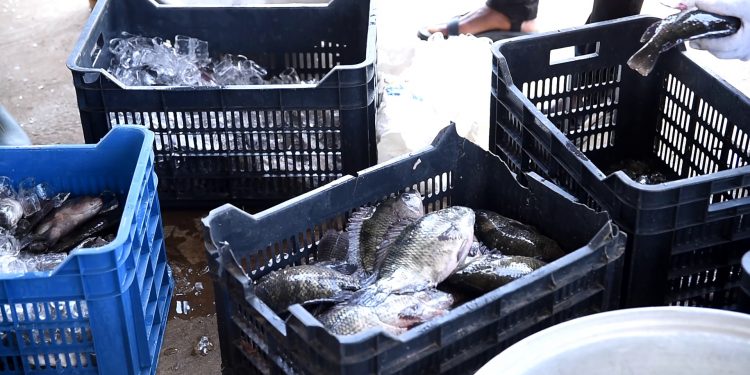 The aquaculture or fisheries sector has not been spared the debilitating impact of the coronavirus pandemic. Sales for major fish farms dipped by a sharp 70% during the lockdown, but peaked to about 50% after the partial lockdown was lifted.

But a visit to three major fish farms namely Triton, Tropo and China Fujian fish farms, shows the woes of the sector have been deepened by the coronavirus pandemic.

Watson Pasipamire, the Farm Manager of Triton Aquaculture Africa farms located at Dodi Asantekrom, disclosed to officials from the Environmental Protection Agency EPA, Fisheries Commission and a professor of marine and fisheries sciences all on inspection mission that the pandemic has led to a massive decline in its sales.

“Sales have gone down. In March we were supposed to sell 250 tons we ended up selling 140 tons. In April, we sold 108 against 250tons,” Pasipamire recounted.

Feeding their stock has not come easily as a result. The 4,500 tons capacity farm is now compelled to produce 500 tons. Managing such austere times without laying off any of its 200 staff hasn’t come easily to the Zimbabwean farm manager and his business partners mostly from India:

“…That obviously has resulted in us not being able to feed our fishes as we’d want. It’s been difficult paying salaries because we have not laid off anyone. But we have seen that, that has motivated our workers because they understand our challenges,” he said.

About 2.4 million livelihoods in Ghana are supported by fish farming, and Dango Joshua is one of them.

As a security guard with Triton, he is happy that none of his 199 other colleagues have lost their jobs neither has his salary decreased despite the reduced revenue. 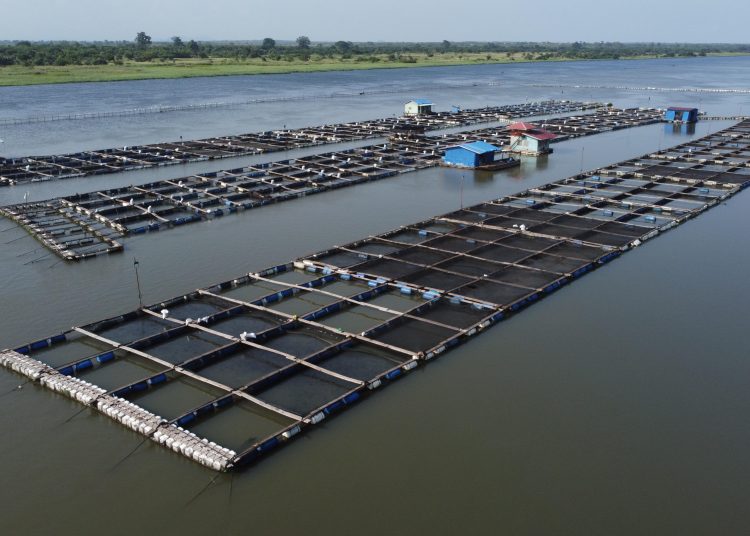 “We get the strain from WRI (Water Research Institute), what we do is that we then continue to develop the strain through selective breeding”.

However, none of the 200 staff has been laid off even though the employers say they have been forced to consider the option. Meanwhile, it says measures are in place to fight COVID-19, and the employees are happy.

At Mapakadan, Tropo Farms sits on a 40 acre land farm. The management observed that, though its hatchery has a 6 million capacity with an annual capacity of 22,000, its sales dipped to 70 per cent during the lockdown and 50 per cent since it was lifted.

The subsequent reduction in sales has led to about 200 of its 900 staff on compulsory leave, putting more pressure on those working. A net repairer, Jack Antwim earns GhC600.00 a month told Citi Business, “Some of our people went home for two months without any payment. My salary has not reduced but the pressure on me has increased because some of our people are now home”.

Like Triton, Tropo Farms also cultures the Genetically Improved Farmed Tilapia (GIFT). A tour around the vast farm, showed that it has put in effort to ensure biosafety and protect staff against COVID-19.

At Asutsuare however, where the China Fujian Fish farms is located, little was ongoing compared to the other farms. The farm that once had 120 employees has had its license revoked for allegedly culturing the GIFT strain which was found in Triton and Tropo farms.

While encouraging the public to patronize tilapia from Ghanaian farms after its inspection, Mrs. Jewel Kudjawu, Programme Officer of the Environmental Protection Agency EPA, said “we saw that most of the farms now have some kinds of the strain so it is up to us decide whether to allow the farms to produce GIFT or not”.

However, over 60 percent of this consumption is imported. In 2016 for example, Ghana spent 135 million dollars importing fish due to its depleting stock. And Prof. Francis Kofi Nunoo of the Department of Marine and Fish Sciences of the University of Ghana believes government must regularize the culturing of the GIFT strain as soon as possible.

“I think the EPA, Fisheries Commission and all relevant stakeholders must come together and agree to allow the farmers to culture the GIFT strain. Studies have shown that the GIFT strain is all over the country – it’s been found on the Volta Lake all the way to White Volta and Black Volta. Most of the farms are culturing one version or the other. My belief is that the GIFT strain has virtually become a local strain because it has acclimatized. We should quickly do our best and support our aquaculture industry to grow,” he said..

Prof. Nunoo added tha, “The fisheries sector is experiencing a decline in growth because farmers have to hide and grow the GIFT strain. It’s unnecessary.”