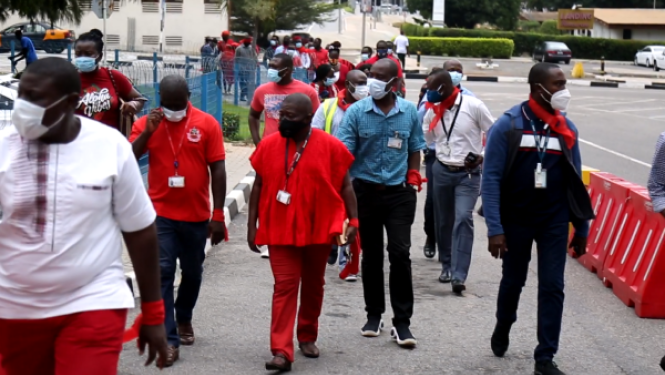 Workers of the Ghana Civil Aviation Authority (GCAA), have called off a one-day strike to make room for more deliberations over alleged encroachment of lands earmarked for the Authority’s operations.

The workers began the strike on Wednesday, October 14, 2020, to speak against the continuous encroachment of lands reserved for operations of the GCAA, a development they claim affects the smooth communication between airlines and Air Traffic Services.

According to the workers, after a meeting with the Aviation Ministry and the other stakeholders on Wednesday, they have decided to return to resume full operations.

The workers say activities on one of the lands under dispute have been stopped pending a meeting with the Chief of Staff and other stakeholders.

“Our main point was that we wanted to draw attention to the issues at hand, so the government officials were here, and we held a discussion to see the way forward. This morning, Thursday,15th October, 2020, we’re going to continue with the discussion so we decided to give them a window of opportunity to see if those issues will be addressed. As a matter of fact, we have taken certain practical steps that from today, they are letting every activity on the land seize and it’s going to be protected by security personnel until all the issues have been addressed and whatever has to happen will happen. So this morning we are resuming normal operations,”
William Amoako, Spokesperson for the Ghana Civil Aviation Authority Workers Union, told Citi Business News.

Background
The workers on October 14, 2020, commenced an industrial action which affects only domestic flights, with the hope of drawing the attention of the Ministry of Aviation, the Lands Commission and the Presidency to the encroachment on lands earmarked for the development of the country’s civil aviation sector.

The workers explained that they had reached out to the National Labour Commission and the Ministry of National Security for assistance, and they had also sent a letter to the Chief of Staff and a petition to President Nana Addo Dankwa Akufo-Addo; all to no avail.

They said the strike had become necessary after exhausting all relevant avenues, including meetings and discussions with the Executive Management of GCAA and the Ministry of Aviation.