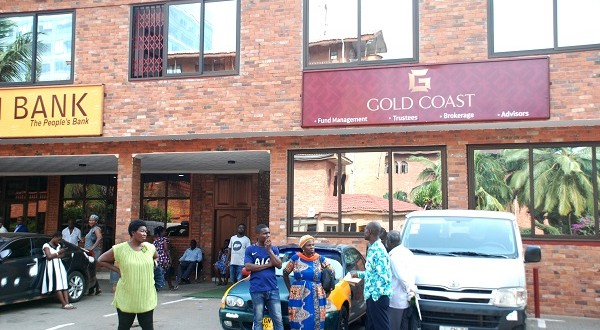 The company, licensed by the Securities and Exchange Commission (SEC), has been struggling to pay customers whose investments have matured in the past 12 months or so.

According to the company, its inability to meet customers’ demands stems from multiple factors ranging from locked up funds it invested in local contractors as well as some regulatory directions passed by SEC.

The company in a “Press Information Pack” released to the media said while it is embarking on aggressive drive to retrieve its funds locked up with contractors as well as other borrowers, it is of the strong believe it is in the interest of government to help Gold Coast Fund to preserve the sanctity of the financial sector.

Gold Coast Fund which has more than 90,000 corporate and individual customers stated:

“Supporting institutions such as GCFM in raising external funds to settle its customers will not only solve the challenges that these institutions are facing but it will also prevent the further weakening of an already stressed financial sector.”

Despite filing a number of legal cases against some Ministries over delayed payment to government contractors –financed by Gold Coast Fund, the company said it would equally accept government bonds as payments for the indebtedness.

“Given that exposure to contracts sponsored by Government agencies represents a significant percentage of our portfolio, one of the strategies GCFM is pursuing is the receipt of a Government bond or guarantee, against which the company can raise external money to pay customers.

“The challenges that the Government of Ghana is facing paying its contractors are well-publicized and we believe that with such a bond or guarantee, we will be able to reduce the pressure on Government to immediately pay a significant portion of the outstanding portfolio,” the company noted.

According to the information pack, Gold Coast Fund’s ability to meet customers’ demands will determined by its ability to retrieve its locked-up funds from entities as well as individuals.

“A number of our debtors have been responsive to our attempts to collect funds that are owed. Payments plans are being negotiated which, if adhered to, will provide liquidity to deal with the urgent needs of some of our customers,” the company revealed.

However, the company added that debtors who have been unresponsive to its attempts to negotiate with them are being taken to court. Details of those lawsuits will be made available to the extent permissible by law.

According to the company, its funds in excess of GHS2.2 billion is locked up and retrieving these will go a long way to alleviate the liquidity challenges it is currently facing.