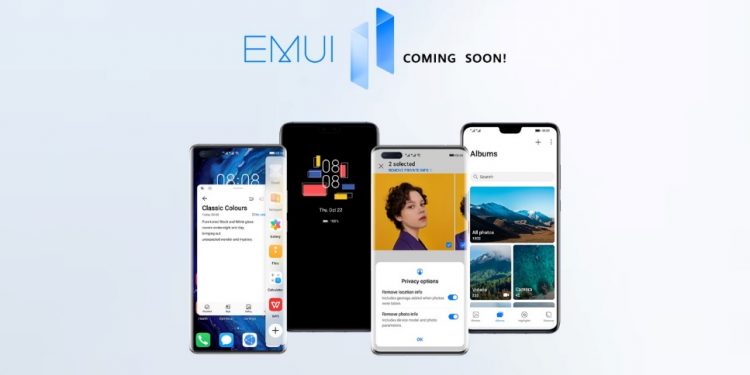 Huawei, the world’s leading technology company has announced the rollout of its new EMUI platform, EMUI 11, for an initial 14 flagship Huawei smartphones. Launched during its Global Launch Event on October 22nd, EMUI 11 brings a range of new software features, improvements to privacy and security, as well as a smoother and more intuitive user experience to help Huawei devices stay faster.

Devices included in the update are as follows:

From a design perspective, EMUI 11 offers a new-generation Always-On Display (AOD) experience with the addition of a new modern art style. Comprising mainly red, yellow and blue colours, the new AOD uses seemingly simple lines to depict a sense of inimitable elegance that seizes the attention of the beholder. The colour palette can also be customized.

Instead of primary colours, users are free to personalise their AODs by choosing from an expansive spectrum of colours. Alternatively, users can use the colour extraction technology built into the feature by taking a photo of their clothes, purse, shoes or other accessories to generate a bespoke set of custom colours.
The support for the feature varies depending on the device model.

Inspired by its namesake technique in the field of cinematography, these animations leverage the shared content or areas between two interfaces to produce a smooth transition from one to another. This ensures focus continuity, allowing users to keep their eyes on the most important and active parts of the screen, all the while enhancing visual smoothness and providing a substantial boost to visual recognition efficiency.

Existing users should be no stranger to EMUI’s Smart Multi-Window, Edge Panel, Floating Window and Multi-tasking features. EMUI 11 introduces an improved Smart Multi-Window experience. The new operating system allows users to open multiple Floating Windows at once. These windows can be minimized to the new Quick Ball, which can be expanded to show all collapsed windows quickly with a single tap. Further, in response to user feedback, EMUI 11 adds support for adjustable windows – re-sizing is as easy and effortless as dragging a corner of the window.

Productivity-boosting Multi-Screen Collaboration gets an update

Huawei’s distributed technology on EMUI 11 brings new improvements to smartphone-notebook and tablet-notebook Multi-Screen Collaboration. At the time of launch, users could have two concurrent active smartphone apps running on a PC (future updates will bring that to up to three). With the update, users can easily compare prices between two online retailers, respond to text messages while catching up on TV show, or enjoy complete control with stock quotes showing on one window and a trading platform on another.

Augmented with the CC EAL5+-certified TEE OS microkernel, EMUI offers comprehensive security protection for users. EMUI 11 builds upon the strong foundation with the introduction of Encrypted Memo, which secures personal memos behind a password or biometric check. Sensitive data on captured photos, such as location, time and model of the device used to create the image, can easily be purged from the media, preventing malicious actors from using the data for fraudulent purposes.

From the new UX design delivering beautiful visual and interaction experiences, to powerful new enhancements to the Multi-Screen Collaboration and Smart Multi-Window offering a multi-tasking efficiency boost, EMUI 11 is shaping up to be a massive improvement over its predecessor. Since the launch of EMUI 10, Huawei has greatly accelerated the pace of the update roll-out. And with EMUI 11, Huawei reaches another milestone with a beta programme ready at the time of the OS announcement, a testament to Huawei’s commitment to the existing Huawei device user base.