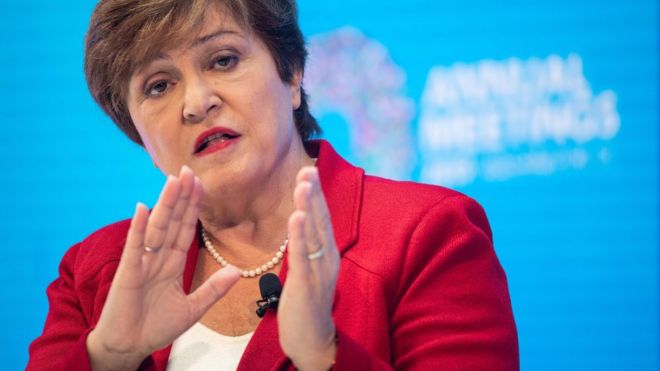 The global economy is growing at its slowest pace since the financial crisis, the International Monetary Fund (IMF) has said.

The fund said world growth would hit just 3% this year – down from its July forecast of 3.2% and a sharp slowdown from just two years ago.

The IMF blamed the slowdown on trade fights, Brexit uncertainty and other geopolitical crises.

It added there is an “urgent” need for leaders to de-escalate the tensions.

“The global outlook remains precarious,” the international lending body said in its annual report. “At 3% growth, there is no room for policy mistakes.”

The IMF, which downgraded its forecasts for most of the world, predicted that growth in advanced economies would slow from 2.3% in 2018 to 1.7% this year.

In the UK, where Brexit-related worries have hurt investment, growth is forecast at 1.2% for 2019, down from 1.4% last year.

China’s economic growth is expected to slow from 6.6% to 6.1%. It has been hit by efforts to rein in risky debt and the trade war with the US, which led the IMF to shave almost a percentage point off global growth.

Thus far, the IMF said central banks have managed to blunt the impact of the slowdown with tools such as low-interest rates. Without those stimulus policies, it estimates that the growth rate would have been 0.5 percentage points lower this year.

“With central banks having to spend limited ammunition to offset policy mistakes, they may have little left when the economy is in a tougher spot,” the fund said.

The IMF said the global economy could grow faster in 2020, at 3.4%. However, it warned that risks are “skewed to the downside”, noting that the pickup depends on improvements in India, as well as several economies currently under severe strain, such as Argentina, Turkey and Iran.

“Policy missteps at this juncture, such as a no-deal Brexit or a further deepening of trade disputes, could severely undermine sentiment, growth, and job creation,” it said. “The foremost priority, in many cases, is to remove policy-induced uncertainty or threats to growth.”