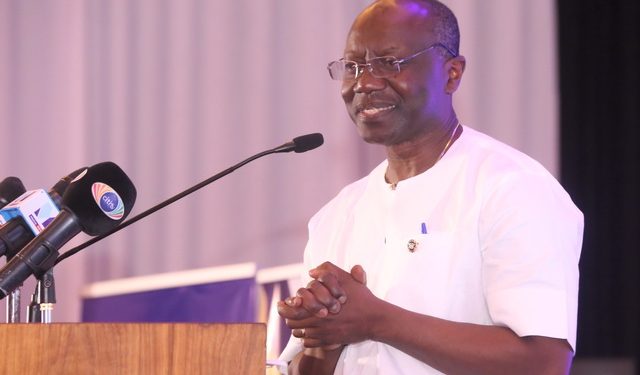 Ghana’s Finance Minister, Ken Ofori-Atta, has successfully completed his two-year tenure as the Chairman of the Development Committee of the World Bank and IMF, after chairing his 4th DC plenary meeting.

The Committee discussed a build-back strategy for the global economy in view of the unprecedented ravages brought about by the COVID-19 pandemic.

The pandemic has resulted in the largest global economic contraction of the last eight decades. It has also overwhelmed health systems, disrupted productivity, exacerbated job losses, reduced incomes, and threatened global food security particularly for the most vulnerable.

A statement issued by the Ministry of Finance noted that, the plenary considered two main topics: “Leaning Forward to Save Lives, Scale-up Impact, and Get Back on Track: World Bank Group COVID-19 Crisis Response Update” and the “Joint IMF-WBG Staff Note on the Implementation and Extension of the Debt Service Suspension Initiative”.

Opening the plenary, the Minister indicated that “the crisis is threatening to reverse years of development gains and throw hundreds of millions of people back into poverty.”

In stressing the importance of the G20 Debt Service Suspension Initiative (DSSI) in giving fiscal space to economies, he stated that “since its endorsement, many of the poorest countries have worked closely with official bilateral creditors.

The moratorium has been a critical liquidity intervention to save much needed resources to tackle the crisis bef6re us.”

He suggested a 2-year extension and re-examination of the DSSI.

On the DSSI, the World Bank President, Mr. David Malpass, asserted that there was the need for a new approach for a fair and balanced relationship between creditors and debtors.

He also mentioned that he looked forward to the new framework to lead to the reduction of debts.

On the issue of vaccine finance, Mr. Malpass informed the Committee that the Bank’s Board of Directors had approved additional financing of up to $12 billion to help countries purchase and distribute vaccines which will ensure that initial vaccine doses are available to those who need them first in IDA and IBRD countries with limited access.

He stressed that “Financing will be available immediately.”

The Minister suggested that, as a ‘Global good’, we need to be more innovative about providing free access to everyone.

The IMF Managing Director in her remarks, highlighted the uneven fiscal response deployed by Developed Countries, in stark comparison to Developing Economies.

She stated that, Developed Economies have averagely deployed fiscal stimulus of about 20 percent of GDP, emerging markets up to 6 percent of GDP, while Low Income and Developing Countries have deployed, on average, 2 percent.

The International Community should therefore not prematurely withdraw fiscal support to developing economies as they remain the most vulnerable.

She stated, “LIDCs need strong support from the international community to overcome the crisis and embark on a sustained recovery.”

In his concluding remarks, the Minister stated that the COVID-19 Pandemic has brought us to this precipice, a tipping point where critical action must be taken to avert imminent disaster. A lot has been said within the last 8 months about what is upon us and what needs to be done to ensure a just and inclusive recovery for all; but a lot more needs to be done. He stated that the DSSI needs to be debt reductive and emphasized the need for the US and Europe to facilitate the issuance of new and unused SDRs.

Also, in the spirit of comparable treatment of all creditors and to ensure universal participation, China and private sector creditors should specifically engage Africa in particular for a debt restructuring programme; and finally, there should be debt forgiveness and cancellation for vulnerable and debt distressed countries.

He called for a special Secretariat to work towards establishing a ‘fit for purpose’ and new global financial architecture as was done in Bretton woods. He proceeded to acknowledge the incredible leadership and passion that the Fund and Bank had shown over the period under the leadership of Madam Georgieva and Mr. Malpass.

He reminded them of his farewell note – A CALL TO RIGHTEOUS ACTION – circulated to the Members of the Committee and Executive Directors of the World Bank Group in which he shared with them, a collection of artwork and symbolism that has over the years, been life-changing tools of reflection for him – at Achimota High School in Ghaa.

Columbia College and Yale University in the US, on Wall Street, as a Henry Crown Fellow of the Aspen Institute, curing his life as an Entrepreneur in Ghana and in his Christian Faith.

The Minister summed up his reflections with the words of Martin Luther King, “In the end, we will remember not the words of our enemies, but the silence of our friends” and charged them to the effect that “the burden of responsibility we feel today should stir us to righteous action; and if we seek His righteousness to guide us, Iam confident that together we will be victorious!”

He handed over to Ms. Mia Amor Mottley, Prime Minister and Minister of Finance of Barbados, and Ms. Azucena Arbeleche, Minister of Economy and Finance of Uruguay, who have been selected as sequential DC Chairs starting November 2020 to October 2022.

The 2020 Development Committee plenary was held virtually on Friday, 161h October 2020. The Committee is an inter-ministerial Committee of Finance and/or Development Ministers who represent the full membership of the Bank and Fund.