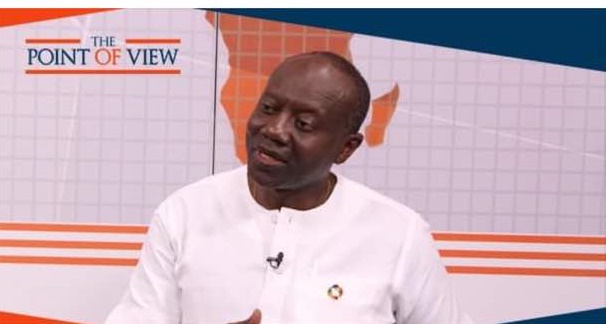 The Finance Minister, Ken Ofori-Atta, says the banking sector reforms undertaken by government in 2017 and 2018, has strengthened local banks, making them more resilient to shocks.

Assessing the balance sheets of local banks currently, the Finance Minister argued that the financial health of Ghanaian-owned banks are stronger compared to the period before the cleanup exercise.

Mr. Ofori-Atta, who made the assertions in a post Mid-Year Budget interview on Citi TV’s current affairs show, the Point of View, suggested that it is better to have fewer local banks with strong financial capacity, than having many weak local banks unable to drive economic development through lending.

“The fact that you have comatose banks owned by Ghanaians does not serve you any good,” he stressed, adding that some of the local banks were just surviving on liquidity support from Bank of Ghana and putting depositors’ funds at risk.

In 2017, the central bank commenced a series of clean-up exercises in the financial sector that saw the revocation of licenses of 9 banks, 347 Microfinance companies, 23 Savings and Loans Companies and Finance Houses, as well as 39 Microcredit Companies.

Mr. Ofori-Atta reiterated that having a large number of local banks with weak balance sheets was inimical to the economic growth of the country, since they lacked the capacity to support lending to critical sectors of the economy.

He pointed out for example that “people’s money was in jeopardy”, hence the decision by government to intervene and “not just to increase the capital so that we have strong capital”.

Providing some examples, Mr. Ofori-Atta said the decision to create the Ghana Amalgamated Trust (GAT) to guarantee the capital injection for five local banks demonstrates government’s commitment not to just to create local banks with low lending capacity, but equip them to support the economic development plans of the government.

He added that the move to merge five weak local banks into the Consolidated Bank Ghana (CBG), has given birth to one of the promising financial institutions that is serving thousands of customers whose deposits were in danger.

According to government, 21 billion Ghana Cedis was allocated for the entire financial sector reform which included banks and Specialized Deposit Taking Institutions (SDIs).

Indeed, the central bank indicated that the reason why most banks were able to withstand increased withdrawals and met depositors’ demand for cash in the lockdown period, was due to the fact that banks were solvent and well capitalized.

In its Banking Sector report released in March 2020 looking at the impact of COVID-19 on the financial sector, the central bank indicated that banks have posted sterling financial performance at the back of the increased capital requirement which was pegged at 400 million cedis.

For the Bank of Ghana “the banking sector’s performance revealed strong growth in total assets, credit, deposits, and profits”.

The central bank stressed that the improved financial indicators further cemented the stability and resilience of the financial sector.

It is important to state that the Bank of Ghana also testifies of the resilience of local banks that were within the period also able to demonstrate capacity of solvency, liquidity, asset quality, efficiency and profitability.

SDIs shaken due to ongoing reforms

Even though banks were able to withstand the shock, the situation was entirely different for some of the Specialized Deposit Taking Institutions.

This was evident in the fact that the cleanup of Microfinance Companies and Savings and Loans Companies as well as Microcredit institutions is still ongoing with a few aggrieved customers demanding their locked up funds.

The Receiver, Eric Nana Nipah, has disclosed that about 98 percent of valid depositor claims of customers of the defunct Microfinance Companies, Savings and Loans Companies and Finance House Companies, as well as Microcredit institutions, are on course to being fully settled in cash, with the remaining 2% of valid customer claims being fully settled by a combination of cash and bonds. President Akufo-Addo has promised that all customers of these defunct companies will be fully paid.

A breakdown of the figures show that the Receiver has worked on total claims valued at 6.44 billion cedis. There is approximately GHS1.76 billion in value of claims numbering about 146,000, which were submitted after the extended deadline for the submission of claims.

According to a document sighted by Citi News, there is a delay in processing the remaining claims of 16,000 worth GHS330 million.

The delay is due mainly to the non-existence of records on 36 institutions with claims amounting to approximately GHS252 million. For now, the Receiver is taking approximately GHS74 million cedis worth of claims through re-validation.

Presenting the 2020 Mid-Year Budget in July, Mr. Ofori-Atta recounted some initiatives undertaken by the Bank of Ghana to stabilize activities in the financial sector amidst the COVID-19 spread.

In March, the Monetary Policy Committee (MPC) of Bank of Ghana reduced the Monetary Policy Rate (MPR) by 150 basis points to 14.50 percent as part of broad measures to boost economic activity.
The committee further announced a 2-percentage point reduction in the Cash Reserve Requirement (CRR) of DMBs.

Mr. Ofori-Atta explained that this measure was to bolster liquidity in the banking system, and provide incentives for increased lending to critical sectors of the economy.

For him, this was part of the broader strategy of the Bank to mitigate the downside risks to the real sector.