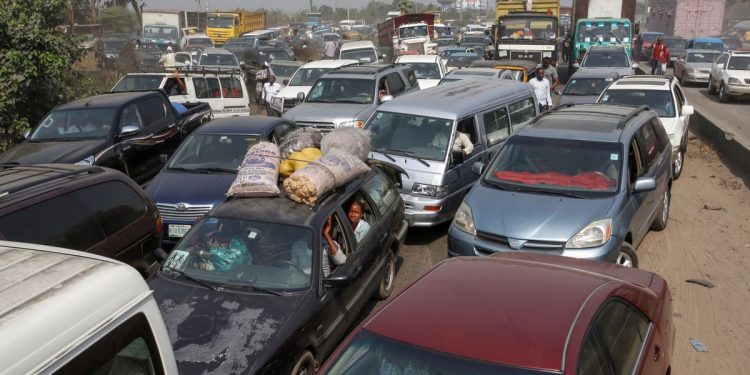 Nigeria is counting on gas-powered vehicles to help it reduce reliance on gasoline and improve its climate credentials while easing the pangs of ending decades of an expensive fuel-subsidy regime.

Energy prices have shot up sharply after the government ended subsidies and the country’s labor unions are threatening a general strike on Sept. 28.

After a 60% loss of revenues due to the plunge in oil prices, President Muhammadu Buhari is insisting the decision cannot be reversed.

As a palliative, Africa’s top oil producer is offering a 250 billion naira ($648 million) stimulus package under a National Gas Expansion Program that it hopes will spur the use of gas in transportation as an alternative to gasoline-powered cars, according to the central bank.

Investors can access the fund, which has maximum tenor of 10 years, at interest rates capped at 5% until the end of February next year, and then 9% afterward.

The new plan involves getting thousands of buses and trucks to run on the cleaner fuel by collaborating with investors to build the required infrastructure, such as pipelines and refueling stations, on major highways across the country of more than 200 million people.

Companies such as Nipco Plc, a fuel retailer, and Sagas Energy Ltd., a gas distributor, are among participants already signed up, according to the ministry.

With proven reserves of more than 200 trillion cubic feet of natural gas, Nigeria currently produces about 8 billion cubic feet daily, most of which goes in liquefied natural gas exports. Local consumption is still largely limited by lack of distribution facilities, and a lot of the country’s gas is simply burned off or pumped back into oil wells.

Nipco has fitted more than 5,000 vehicles with conversion kits that allows them to run on natural gas in and around the southern city of Benin and now eyes the opportunities presented by the millions of cars on the country’s roads.

“CNG, unit for unit, costs less than even the subsidized gasoline,” said Lawal. “We believe that when an alternative is given to Nigerians, they will get used to it.”