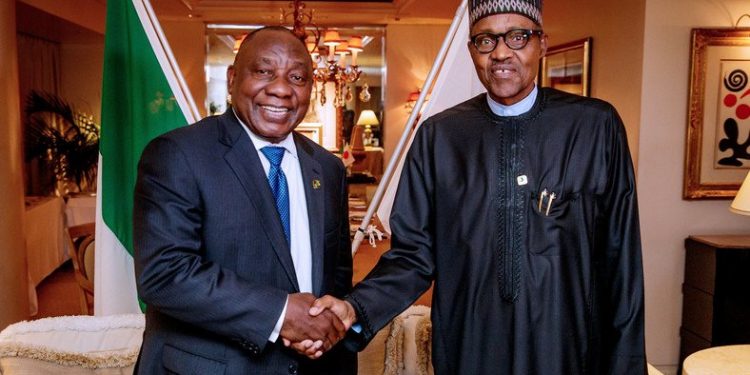 108
SHARES
1.5k
VIEWS
Share on FacebookShare on TwitterShare on Whatsapp

The signing of the trade agreements by Nigeria and South Africa, which took place at the end of a two-day visit by President Muhammadu Buhari in the wake of a xenophobic attack on Nigerians and other foreigners in South Africa, eased tensions which followed the recent attacks that saw 600 Nigerians return home.

President Buhari called on the South African government to open up its economy for more Nigerian businesses while guaranteeing their safety, stressing the need for reciprocity in promoting trade and investments between both countries.

Buhari, who co-chaired the inaugural meeting of the 9th Bi-National Commission in Pretoria at the level of heads of state, said South African companies had enjoyed unfettered access to Nigerian market and protection with enabling laws, urging the government to design policies that favour investments from Nigeria.

“We call on the government of South Africa to also take steps to ease the doing of business in the country and open up its market space for Nigerian businessmen and women,” Buhari said. “In this context, we are gratified that a Nigeria-South Africa Business Forum has been organised in the framework of this state visit.”

Buhari told Nigerians living in various parts of the world, especially in South Africa, to adhere to the laws of the country they reside and ensure compliance with market laws.

“Like it is said, ‘when you are in Rome behave like the Romans’. Always be law-abiding,” he said.
On his part, President Ramaphosa announced both countries had signed 32 bilateral agreement and memorandum of understanding and acknowledged the need to promote greater Nigerian investment in South Africa where he said Nigeria has “quite a number” of Small and Medium Enterprises.

The South African president promised to deepen the reforms to “address the imbalance” that has favoured the establishment of large South African corporations in Nigeria without a corresponding size of Nigerian businesses in his country.

He said the attacks on foreigners in South Africa, including Nigerians, were regrettable, assuring that his government would work hard to see an end to such attacks. He said the reprisal attacks in Nigeria were also condemnable.

Geoffrey Onyeama, Nigeria’s minister of foreign affairs, and Naledi Pandor, South African minister of international relations and cooperation, signed agreements on the minutes of the 9th session of Bi-National Commission.