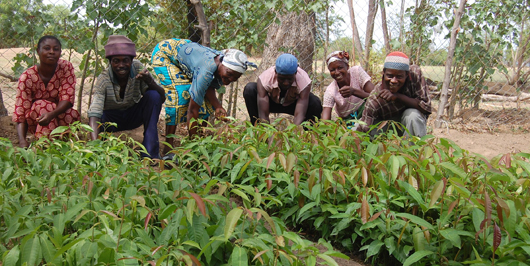 154
SHARES
1.9k
VIEWS
Share on FacebookShare on TwitterShare on Whatsapp

A total of nine farmer cooperatives in the Upper West Region have received assorted equipment and logistics to help improve their livelihoods.

The equipment including motor king tricycles, beehives, grinding mill and other materials were presented to the nine cooperatives with membership of about 200 to support their line of activities.

The gesture is under the Training of Farmer Leaders Action Plan component of the Capacity Development of Farmer-Based Cooperatives and Farmer-Based Organisations (FBCs/FBOs) in Northern Ghana project.

The Korea government through the Korean International Cooperation Agency (KOICA) is funding the project with a grant of US$6,180,000 to be disbursed over a 42-month period.

Mr. Frederick Addo-Yobo, Communication Specialists for the Korean International Development Agency (KOICA) FBCs, FBOs project, disclosed this when he presented the equipment to the beneficiaries at the forecourt of the Upper West Regional Coordinating Council (RCC).

He said the presentation of the equipment formed part of the 210,000 US dollar package under the Training of Farmer Leaders Action Plan support.

The KOICA Communication Specialist noted that all 210 participating farmer groups were currently benefiting from that component of the project.

“Beneficiaries will be expected to develop action plans and half of them (up to 105 FBCs/FBOs) will be given technical and financial support to implement their business plans under the component”, he said.

Presenting the equipment to the beneficiaries after the briefing, Dr. Hafiz Bin Salih, Upper West Regional Minister expressed gratitude to the Korean government for supporting the efforts of the government to improve rural livelihoods.

He appealed to the beneficiaries to handle the equipment with care in order to derive the maximum benefit and stressed that would serve as a motivation factor for more people to benefit.

Mr. Cornelius Kunkara, an official of the Association of Church-based Development Projects (ACDEP) and Team Leader for the FBCS/FBOs Capacity Building Project, noted that even though it was a grant, communities contributed 10 percent of the total cost of the equipment they received.

He said the 10 percent contribution would serve as a motivating factor for them to own this equipment and take proper care of them, adding that the asset management training they received was to help them manage the assets for their own benefit.

He said there would be a structured monitoring mechanism to ensure that the equipment was put only on ventures that would benefit group members and the entire communities.

Mr. Philip Zinyeni, Secretary of the Baptist Cooperative Farmers Group said the grinding mill they have received would help lessen the burden that women go through in walking to nearby communities to grind flour to prepare food for their families.

Mr. John Dramani Mahama, the Secretary of Kaarasung Farmers’ Cooperative Union at Loggu said the tricycle received by the group would aid in addressing the challenge of transporting food and other goods from their farms to the house and market centres.

He said the tricycle would also help raise revenue for the union to embark on other ventures to support the growth of the union.