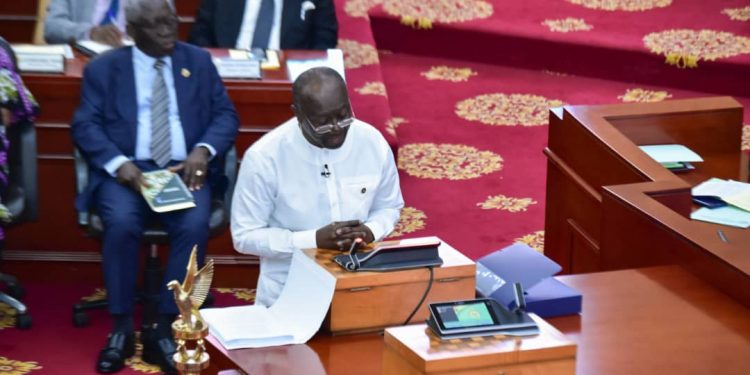 The amount being sought by Mr. Ofori-Atta represents more than 21 percent of what the government is likely to spend for this year.

According to the 2020 budget statement, GH¢21.7 billion nearly 25 percent of the planned expenditure, will go into the payment of interest on the government’s debt. Apart from the interest payments, the projected amount of money to be spent on wages and Salaries is close to GH¢23 billion.

Although the government is hoping to spend more than 50 percent of what it spent on the provision of infrastructure in 2018, that amount is only GH¢9.3 billion – a little below 11 percent of the overall GH¢86 billion total expenditure.

The allocation made for goods and services is GH¢8.3 billion, which represents 9.7 percent of the projected total expenditure (including arrears clearance).

Although the government has missed its revenue targets in the last four years, it is still hopeful that it can generate GH¢67.1 billion in revenue in 2020.

Presenting the 2020 budget to Parliament, Mr. Ofori-Atta stated that next year’s revenue target which is more than 22 percent of what is to be collected in 2019.

He said meeting the revenue target for 2020 is possible because of expected improvements in tax compliance and reforms in revenue administration, and the full-year revenue yield from revenue measures announced in the mid-year budget.

Ghana’s 3-year IMF programme was supposed to have ended in 2018, but was extended after several targets were missed following unplanned expenditure during the 2016 election year left the programme hanging.

One of the key features of the programme is fiscal consolidation which basically requires the government to endeavour to keep expenditure in check, while seeking to rope in more revenue and limit reliance on borrowing to finance the budget deficit.

The Fiscal Responsibility Act which was passed after the Fund programme limits government budget financing to 5 percent of GDP in any fiscal year.

Keeping the budget deficit in check in election years has always been a tall order for successive governments.

But Mr. Ofori-Atta told Parliament that the Akufo-Addo government’s commitment to controlling the election-year budget deficit is demonstrated by its passage of the Fiscal Responsibility Act.

Next year’s deficit is estimated to be about GH¢19 billion, representing 4.7 percent of GDP. This deficit will be financed from both domestic and foreign sources.