by Nerteley Nettey
in Oil And Gas, Top Stories
Share on FacebookShare on TwitterShare on Whatsapp

Supply of Liquefied Petroleum Gas, LPG, is expected to resume fully following the resumption of work by Members of the Gas Tanker Drivers Union.

This comes after the Ministry of Employment and Labour Relations held a crunch meeting with the leadership of some groups within the country’s downstream petroleum sector, due to a sit-down strike by the Gas Tanker Drivers Union.

Earlier this week, some parts of Greater Accra, Western and Central Regions, were hit by an acute shortage of LPG, leaving consumers stranded. It will be recalled that members of the Gas Tanker Drivers Union laid down their tools on October 29, 2020, thus causing a nationwide shortage of LPG at the various filling stations.

But in a press release dated Sunday, November 1, 2020, and signed by the leadership of the General Transport Petroleum and Chemical Workers Union (GTPCWU), Ghana National Petroleum Tanker Drivers Union (GNPTDU), Gas Tanker Drivers Union (GTDU) and the Deputy Minister for Employment and Labour Relations, Mr Bright Wireko-Brobby, noted that the gas tanker drivers have resumed work with immediate effect “as government takes steps to resolve the matter with all the urgency that it deserves.

“While the Hon. Minister [of Employment] is grateful to the workers for accepting to go to work, we urge all stakeholders to stay calm until the matter is conclusively resolved in the shortest possible time,” the statement added.

Below is a statement from the Ministry: 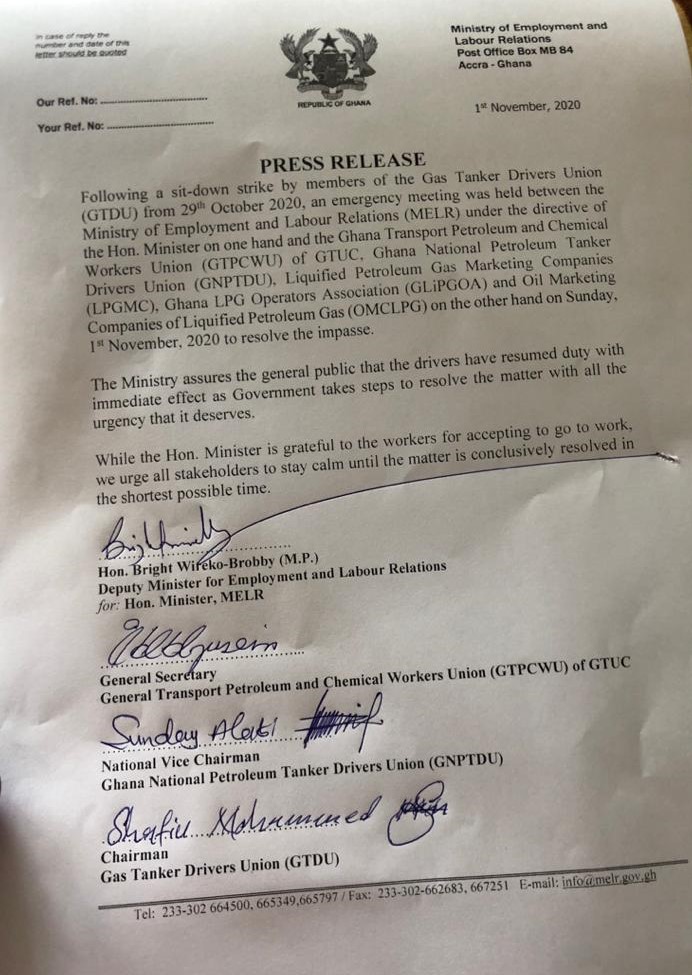