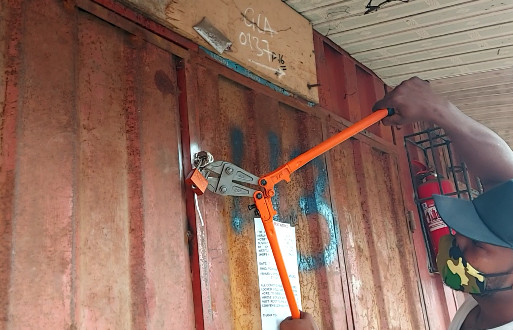 The Ministry of Trade and Industry has announced that all shops closed by the Ghana Union of Traders Association, GUTA, as well as shops already opened in designated operational areas will be opened for assessment by the Committee on Foreign Retail Trade, CFRT, effective August 10, 2020.

According to the Ministry, this is part of directives on the roadmap for the Committee on Foreign Retail Trade to carry out their inspections and enforcement of regulations nationwide.

In a statement issued by the Ministry, the Police command and the MMDAs within the respective areas of operation of the Task Force will be notified and invited to participate in the inspection exercise of the Task Force.

Also, the key public sector institutions including the Ghana Standards Authority, Ghana Investment Promotion Centre (GIPC), Ghana Revenue Authority, Ghana Immigration Service, Registrar General’s Department, and MMDAs, will assume responsibility under the command of the Task Force, for the inspection and verification of documents of shops identified as foreign owned.

It further noted that upon inspection of each shop, notice will be issued on site by that Task Force on the state of compliance by the shop owner, and a deadline set for regularization of documents, following which each non-compliant shop will be closed.

In addition, upon inspection of each shop, notice will be issued on site by the Task Force on state of compliance by the shop owner and a deadline set for regularization of documents, following which each non-compliant shop will be closed.

Furthermore, the inspection will also include an assessment of compliance with regulatory requirements of local assemblies such as Business Operating Permits (BOP) and signages.

It will be recalled that following the impasse arising from foreigners trading in the Ghanaian retail market, the Ghana Union of Traders Association in November and December last year locked up some foreign-owned shops engaged in retail in Accra and Kumasi.

This was pursuant to Section 27 of the Ghana Investment Promotion Centre (GIPC) Act 865, which states that foreigners are barred from engaging in retail business in Ghana, as the space is solely reserved for citizens.

This led to the formation of a Committee by President Akufo-Addo to find a lasting solution to the impasse. As part of its work, the foreign retailers were asked to provide documentation legitimizing their operations in Ghana.

Few weeks ago, the Taskforce together with officials of the Ghana Immigration Service, the Ghana Revenue Authority and some GUTA leaders, reopened some  of the over 600 foreign- owned shops in a three-day exercise, after the owners provided documents to back their trade.

GUTA however insists that 90 percent of the shops had no documentation, and should remain closed.