by Ellen Dapaah
in Banking And Finance, Top Stories 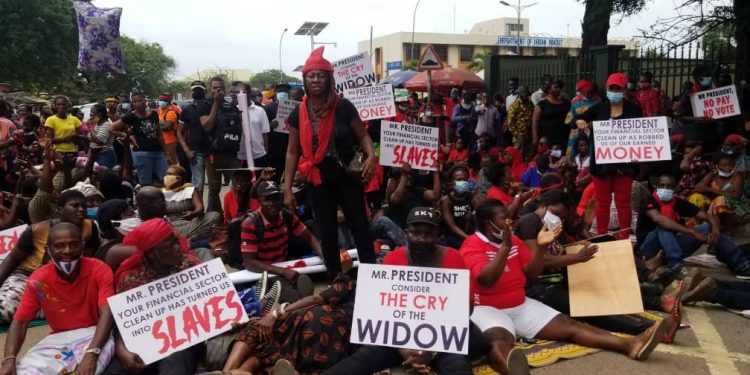 Two members of the Coalition of Aggrieved Fund Management Customers have been arrested for picketing at the Registrar General’s office.

This comes barely a day after the aggrieved customers held a press conference to drum home their concerns to the government about the non-payment of their locked-up funds.

The group made up of over 150 people, who are customers of Blackshield Capital Limited, formerly Gold Coast Fund Management, thronged the premises of the Registrar General’s office, on Wednesday, September 23, to present a petition to express disquiet over their exclusion from the bailout packages.

Amidst loud chanting and singing, the angry customers demanded some assurances from the Registrar General, who is also the official liquidator for the defunct fund management companies.

According to the customers, the Registrar General failed to include them in the list of customers to be paid their locked-up funds.

The Secretary for the Coalition, Joseph Aryeetey, said they were even ready to sleep at the premises of the Registrar General to demand their inclusion in the bailout package.

“Although the Unicredit company was in court, they still went ahead and paid the customers. All that we are telling Jemima Oware [Registrar General] and Nana Akufo-Addo is that, irrespective of Blackshield being in court, they should pay us. That’s all,” he said.

He continued, “We gave her [Registrar General] a prior notice, and she said she is expecting us, so we are waiting for her. The police commander had told us that before we got here, they had to assemble here because Jemima Oware called them and told them that we are coming here to present a petition to her. So that’s why they were waiting for us. So we are going to wait for her. Even if she’s going to come tomorrow, we will wait for her because some of us are from Techiman, Tamale and Kumasi.”

But after hours of waiting, police personnel were called in to disperse the angry crowd, which also ended up in the arrest of the Coalition’s Secretary, Joseph Aryeetey, and one other member.

According to the Accra Regional Director of Police Operations, ACP Kwesi Ofori, the protestors failed to notify them of their action, describing the gathering as illegal.

“Failure to satisfy conditions stipulated by the Public Order Law means the gathering is unlawful. They came in their numbers, blocked roads, and disturbed public peace and security. We, therefore, came in to disperse them in line with Public Order arrangement. We’ve done that and we’ve succeeded. A handful of them have been arrested. We’ll hand them over to the CID to investigate,” he remarked.

But even after the arrest of their colleagues, members of the group were still unfazed in their efforts to demand for their money.

One of the customers, Rosemond Predisky, after the police action still insisted that they will only give up if their problems are solved.

She told Citi Business News that they were proceeding to the police station to stand in solidarity with their arrested colleagues.

This is not the first time the aggrieved customers of Blackshield Capital have demonstrated to demand for their money.

The last time they picketed at the Finance Ministry on Tuesday, September 1, three of them got picked up by the police.

They were later granted bail by the Accra Regional Police Command.

How it all started

The Securities and Exchange Commission (SEC) earlier this month said government was set to announce a bailout package for clients of the 50 defunct Fund Management Companies.

According to SEC, the package will be given in phases with the first phase, which was scheduled to begin on Wednesday, September 23, covering clients of the 20 companies currently under official liquidation.

Earlier reports suggested that no action could be taken for clients of Blackshield Capital Management Limited, Firstbanc Financial Services Limited, Apex Capital Partners and Ideal Capital Partners Limited since they have filed applications in court to challenge the revocation of their licences by the Commission.

This sparked up anger among the customers of Blackshield Capital Limited, who then decided to mass up at the Registrar General’s office to present a petition to her about their concerns.

That, however, did not end well, with two members being arrested and several others sustaining injuries during the rush to flee from the police.

The Registrar subsequently assured that no customer will be left out in the bailout package.