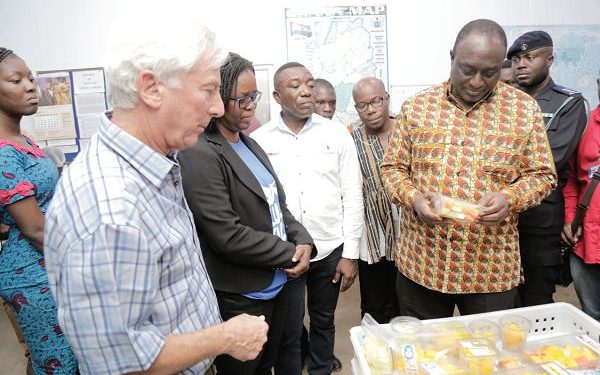 95
SHARES
1.5k
VIEWS
Share on FacebookShare on TwitterShare on Whatsapp

The Minister of Trade and Industry, Alan Kyerematen, has assured the business community of the government’s commitment to resolving bottlenecks that impede trade between Ghana and other countries in the West African sub-region.

“The government is working with the ECOWAS, including our neighbouring countries, to remove obstacles that impede the free flow of goods from Ghana to countries in the Economic Community of West African States (ECOWAS) sub-region,” he added.

The minister stated that with the coming into force of the African Continental Free Trade Area (AfCFTA), businesses and traders would be able to file cases against any impediment on the free flow of goods within the continent.

Mr. Kyerematen was reacting to concerns of the management of Blue Skies Limited, a fresh fruit cut and juice production company, when he visited its premises at Doblo, Nsawam, in the Eastern Region.

The Chairman of Blue Skies, Anthony Pile, had expressed worry about various roadblocks and delays the company encountered along the borders when transporting goods outside Ghana to neighbouring countries.

According to him, such obstacles were not healthy for trade and economic growth among the countries in the sub-region.

“ECOWAS is one of the oldest economic community institutions in the world, yet if you travel from Ghana to Nigeria through Togo and Benin, you will experience about 30 roadblocks on a road; that is appalling,” he stated.

Mr. Pile was also concerned about the inevitable exit of the United Kingdom (UK) from the European Union (EU), and said without any agreement between the UK and the EU over Brexit, Blue Skies and other companies which exported products to EU countries could suffer tremendously.

He, therefore, appealed to the government to fast-track the signing of the Economic Partnership Agreement (EPA) with the EU to provide cover for the company’s exports to the EU countries.

“We desperately need the EPA to be in place in case Brexit happens with no agreement so that we can go on to export products from Ghana to the EU,” he said.

Mr. Pile lauded the government for initiatives such as the One-district, One factory, and for providing an enabling environment for business to thrive.

He, however, pleaded with the government to put in place measures that would enable farmers to meet the raw material demands of fruit manufacturing companies in the country.

The chairman mentioned the inability of farmers to produce fruits such as mango all year round, coupled with the prevalence of the Bacterial Black Spot (BBS) disease, which he said, had adversely affected the production of mango, as some of the main reasons why farmers were unable to meet the demand of local companies.

As a result, Mr. Pile said Blue Skies had to buy raw materials from other countries due to the inability of farmers to meet the company’s demands.

Such a situation, he said, negatively affected the operations of the company and also led to the loss of revenue to the state.