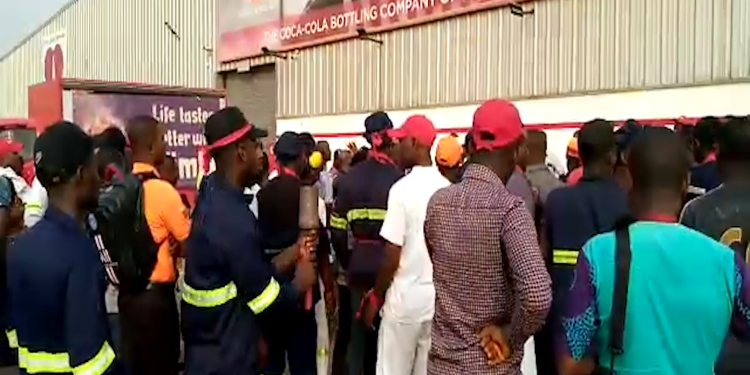 0
SHARES
5.2k
VIEWS
Share on FacebookShare on TwitterShare on Whatsapp

Workers of the Coca-Cola Bottling Company of Ghana have embarked on a mass action against the removal of the company’s Managing Director, Seth Adu-Baah.

The workers, who have been protesting since Monday, January 20, 2020 in their red arm and head bands, have accused the company of unfair treatment against Ghanaian managers.

Seth Adu-Baah, who has worked with the company for 18 years, has served as MD of Coca Cola in Sierra Leone, The Gambia and Ghana, before he was allegedly forced out of the company by the Regional Head of the company this week.

The roles he has served in, have given him wide-ranging experience in all aspects of financial management and control, and crucially, supply chain management, and involved liaising with banks, external auditors, tax authorities and consultants.

According to the workers, Felix Gomez, the Senegalese MD for West African countries instigated Mr. Adu-Baah’s removal. They have vowed to resist any new MD who may be appointed.

The workers union has petitioned the Industrial and Commercial Workers Union, ICU, to intervene in the standoff.

Citi News has picked up reports that the workers have also vowed to cut down production at the Spintex Road factory of Coca Cola to press home their demands.

On Friday, January 24, 2020, the workers demonstrated on the company’s premises at Spintex in Accra, chanting; ‘No Seth No Work’.

According to them, the MD has forged a strong synergy between management, staff and the local union, which ought to be maintained.

Seth Adu-Baah has also been credited with increasing sales volumes of the company over the past two years since he became MD.

In the petition to ICU which was sighted by Citi News, the Local Union executives of the company are calling for an investigation into his removal.