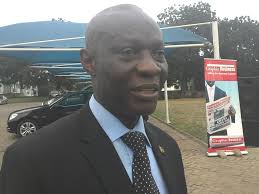 Adu A. Antwi, Director-General of the Securities and Exchange Commission

The Director-General of the Securities and Exchange Commission (SEC) Adu A. Antwi has been awarded an honorary doctor of finance & accounting degree by the Commonwealth University, Belize.

A citation accompanying the award said he was being recognized for his inspirational story of academic and professional achievements, his contribution toward the promotion of good corporate governance and his efforts toward capital market development in Ghana.

The award was conferred upon him at a graduation ceremony of the University held in Dubai on 6th August 2014.

The citation for the award said ‘Mr. Antwi is a self-made man, who rose from low beginnings to become an academic, a chartered accountant, a lawyer and a top public servant’.

Mr. Antwi completed his middle school education at his home town, Anyinam-Kotoku in 1972 and started his working life in Accra as a factory floor worker in 1975.

Desirous of improving his education, he started studying privately in 1978, passed some subjects in the RSA II examination in 1979 and got a job as an Accounts Clerk.

He studied privately to qualify as a chartered accountant from the Institute of Chartered Accountants (Ghana) in 1996 and studied further at the Ghana School of Law to qualify as a lawyer in 2007.

He is currently pursuing Doctoral studies in Business Administration with the Paris School of Business, France.

His educational story has been an inspiration to many, especially his students and professional/work colleagues who see him as their mentor.

Mr. Antwi has held various top management and board positions in public and private institutions in Ghana.

He is a member of the Financial Stability Board Regional Consultative Group for Sub-Saharan Africa and the West African Capital Market Integration Council.

He has also served on a number of financial market committees in Ghana including the Financial Sector Consultative Committee, the Long Term Savings Committee and the National Bond Market Committee.

He has previously served as an Adjunct Lecturer at the Ghana School of Law, the Graduate School of the Central University College, the Ghana Institute of Management and Public Administration, and the National Banking College.

Mr. Antwi has also served as an Instructor for the Ghana Stock Exchange’s securities courses and as a Resource Person for the West African Institute for Economic and Financial Management, Nigeria.

He was acknowledged by The Corporate Guardian (The International Business Magazine) in its Jan – Feb 2003 edition as being at the vanguard of Ghana’s effort to ensure good corporate governance.

In 2004 he set up the Centre for Corporate Governance to promote the practice of good corporate governance in Ghana.

On his assumption of duty in 2011 as the Director-General of the Securities and Exchange Commission of Ghana, where he worked as the Director of Corporate Finance & Investment Management from 1999 to 2003, he set the development and growth of the Ghanaian capital market as his prime focus and was seen by many as a reformist, especially because he took a break from the Commission to do private practice in accounting and law.