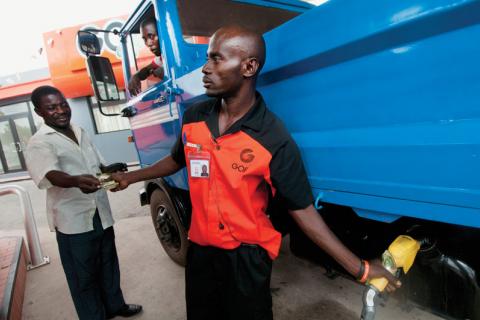 Government will from September 1, 2014 introduce quarterly hedging as a measure to avoid huge debts accumulating from the subsidising price differentials on petroleum products.

It will also protect Ghanaians from a price hike during its review of the prices of petroleum products.

Hence, although there would be a price review of petroleum products on September 1, 2014, the National Petroleum Authority (NPA), would not adjust prices upward, the Deputy Minister of Energy in charge of Petroleum, Mr Benjamin S.K. Dagadu disclosed in an interview with the Daily Graphic in Accra yesterday.

“The government will introduce hedging at the next adjustment period but there will be no increment at all,” Mr Dagadu assured and said “a memo on the proposed implementation of hedging would be sent to Cabinet for approval before the end of next week.”

He said hedging against the prices of petroleum products would ensure that any price volatility on the international market would be contained.

Per the hedging arrangement, the price of crude oil will be pegged at a particular figure over a period of time and, thus any price fluctuation during the period of the hedging would not be pushed on the consumer.

The NPA is expected to announce the pegged price during its review announcement in September, this year.

The government is currently confronted with a GH¢1.3 billion debt to the Bulk Oil Distribution Companies (BDCs), as a result of the depreciation of the cedi against the dollar.

Petroleum products are usually priced in dollars but the government decided to absorb the cost arising from the depreciation of the cedi instead of passing it on to the consumer.

According to Mr Dagadu, the introduction of hedging would prevent foreign exchange losses.

Premix fuel, which powers the outboard motors of canoe fishermen, is the only petroleum product being subsidised currently.

Mr Dagadu gave the assurance that “subsidies on premix fuel would be maintained because it is a social product and as social democrats, we will keep them.”

Touching on measures being put in place to solve the issue of diesel shortage in some parts of the country, Mr Dagadu said aside the 48.6 million litres of diesel released into the system, an additional 122 million which is currently on financial hold would be sent to the market next week.

He said he had a meeting with officials of the Bank of Ghana (BoG) and other stakeholders in the petroleum sector on Tuesday and at the said meeting, the BoG gave the assurance that it would release more than $100 million to commercial banks in the coming days to enable them to raise Letters of Credit (LCs) for the BDCs.

Seven out of 10 banks have refused to issue LCs to pre-finance the BDCs as a result of the liquidity challenges the BDCs are currently facing.

“We welcome the move because it can limit forex losses,” Mr Senyo said.