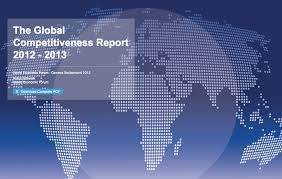 Ghana has been ranked 111th in this year’s Global Competitiveness Index published by the World Economic Forum (WEF).

According to the World Economic Forum, Ghana jumped to 111th this year, largely as a result of slight improvements in its macroeconomic indicators, a reversal of last year’s trend but adds fiscal vulnerabilities still persist.

‘Ghana reverses last year’s downward trend and climbs up to 111th this year, largely as the result of slight improvements in its macroeconomic indicators (reversing last year’s trend), although fiscal vulnerabilities persist’

Government’s deficit stood at 10.8 percent of GDP in 2013, more than twice of that of two years ago; its debt remains over 60 percent; and inflation is over 15 percent.

On the country’s strength it says public institutions are characterized by relatively high government efficiency and strong property rights.

Though it adds that the country’s financial and goods markets are relatively well developed it believes that Ghana must do much more to develop and deploy talent in the country.

According to WEF Ghana’s education levels continue to trail international standards at all levels, with labor markets characterized by inefficiencies.

It adds that Ghana is not sufficiently harnessing new technologies for productivity enhancements with ICT adoption rates continuously at very low levels.

It expresses concern about the country’s security situation, which ranked 111th.

The Global Competitiveness Report assesses the competitiveness landscape of 144 economies, providing insight into the drivers of their productivity and prosperity.

Switzerland tops the chart, followed by Singapore, the USA, Finland and Germany.

Other countries in the top ten ranking are Japan, Hong Kong, the Netherlands, the UK and Sweden.

Defining competitiveness as the set of institutions, policies and factors that determine the level of productivity of a country , GCI scores are calculated by drawing together country-level data covering 12 categories – the pillars of competitiveness – that collectively make up a comprehensive picture of a country’s competitiveness.