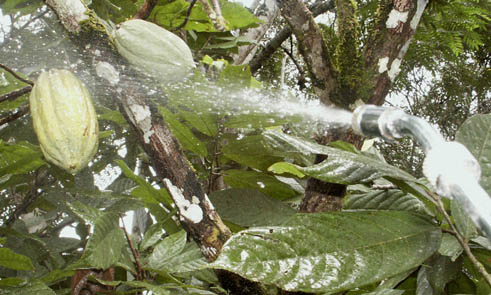 The cocoa mass spraying exercise was instituted in 2001 by the Ghana Cocoa Board (COCOBOD), in consultation with government to support cocoa farmers to eliminate cocoa diseases and help increase production.

Dr. Owusu Afriyie complained that the exercise was discriminatory, expressing concern about the limited number of bottles of insecticides allocated to the various cocoa-growing districts for the exercise.

COCOBOD which is mandated to monitor the mass spraying exercise has hinted of phasing out its free mass spraying of cocoa farms across the country within the next three years.

This decision has been rejected by the farmers and stakeholders.

There is no doubt that since the implementation of the mass spraying exercise, the production of cocoa in the country had increased significantly.

Dr. Akoto Owusu Afriyie has since cautioned COCOBOD against the planned phasing out of the programme.

He advised them to take measures to solve the implementation challenges confronting the exercise rather than abandon the cocoa farmers to their fate.

At the moment, the Producer Price Review Committee (PPRC) on cocoa has reviewed upwards, the producer price of cocoa which took effect from October 3.

According to Dr Owusu Afriyie, cocoa production has reduced over the years because inputs for the mass spraying exercise were being smuggled to neighbouring countries.

He told Citi Business News, cocoa farmers in Ghana will massively benefit from the exercise if government has good monitoring systems in place rather than thinking of phasing it out.

“The current free fertilizing programme is strengthening the black market. What is the point of all these to sit in Accra at the fourth floor of cocoa house and announce that everything is free for the farmers, without ensuring that the farmers are the beneficiaries is so bad?” he asked.

The Member of Parliament (MP) for Kwadaso said his checks have revealed that farmers are prepared to now buy the fertilizers and other farm inputs which heather to is to be given for free at full cost on the open market.